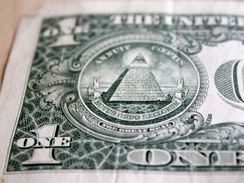 The financial crisis began to impact the stock market in November 2007. At that time the U.S. Dollar Index -- a weighted average of the price of various currencies relative to the dollar -- was around 76, having dropped from 84 at the start of the year. As the crisis unfolded, I began to receive many calls from investors and financial advisors who were concerned about the value of the dollar. Many were alarmed by the fear that the dollar was about to lose its status as the world's reserve currency. Many talked of the euro taking on a much bigger role.

Is gold a good investment?
What Warren Buffett knows that you don't
How bond and stock returns correlate

The Federal Reserve contributed to investor concern by driving interest rates to zero and buying up bonds. The concern was that this policy would lead to a rapid increase in inflation.

We know today that the financial crisis turned out to be the worst we faced since the Great Depression. The Fed has kept its zero-rate policy now for almost four years and tripled the size of its balance sheet. In addition, the economic recovery has been tepid at best.

So how did the dollar fare? After hitting a low of about 71.5 in April 2008, the dollar index has rebounded to about 83. And of course the euro has fallen from about a high of about $1.60 in 2008 to about $1.25. As to the runaway inflation investors were worried about, it has averaged about 2 percent, well below the 3 percent it has averaged since 1926. And investors who were preaching to avoid long-term bonds because of low interest rates ended up not only with egg on their faces, but with the problem of reinvestment risk.

The lesson of the rear-view mirror is that what may seem painfully obvious at the time may turn out to be dead wrong. The other lesson is that paying attention to economic and market forecasts is likely a recipe for failure, because the academic research demonstrates that there are no clear crystal balls, only cloudy ones.