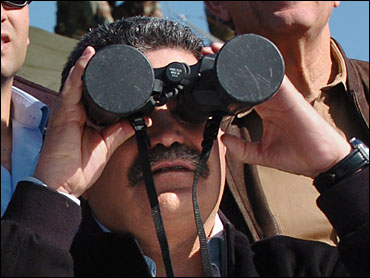 Israeli newspapers on Thursday ran front-page pictures of Defense Minister Amir Peretz on a hill in the Golan Heights, inspecting his troops through binoculars with the lens caps on.

It was just the latest embarrassment for Peretz, whose popularity has plummeted in the wake of last summer's inconclusive war against Hezbollah guerrillas in Lebanon.

Peretz joined the new army chief of staff, Lt. Gen. Gabi Ashkenazi, watching Wednesday's large-scale maneuvers. The pictures show the two side by side with military binoculars held up to their eyes — but Peretz's still have the lens caps in place. The photographer said Peretz raised the capped binoculars three times, nodding as Ashkenazi explained what he was "seeing."

Peretz has been under fire from the day took up his post last year, because of his limited military background. Most Israeli defense ministers have been ex-generals. His handling of the war added weight to the criticism and spawned calls for his replacement.