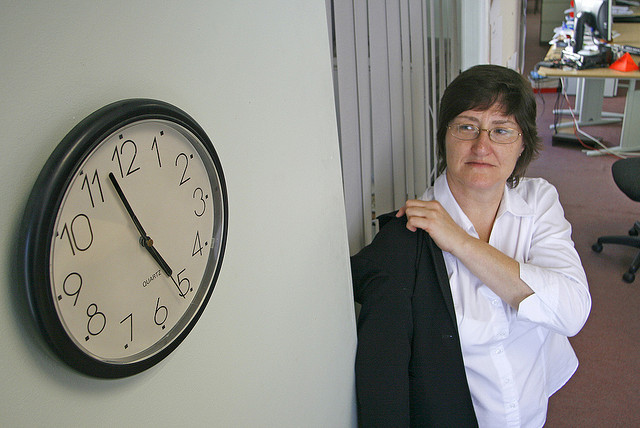 We have an employee who periodically leaves early. When she does, she skips lunch and tells her supervisor an hour before she is leaving that she is leaving early and didn't take lunch. While my answer would be to document this and issue a memo/warning, we are a small company. This particular employee is good friends with the CEO and has been here for 16 years. When she is disciplined, she gives everyone the silent/nasty treatment. Any ideas on how to address this with her? Her manager basically wants to say that leaving early isn't necessarily an issue -- she just needs more notice and that it can't happen regularly.

So is leaving early an issue at your company? I ask because the employee's manager is saying it isn't and that he just wants notice when someone is planning an early exit. Or is he saying that because this person is buddies with the CEO?

If it's just a matter of employees providing advance warning, the manager needs to say the following: "Jane, you're welcome to go home at 4 p.m. if you work through lunch, but I need to know no later than noon if you are going to do that. If I don't hear from you by then, I expect you to be at your desk until 5 p.m."

My guess is the employee in question doesn't say anything because she's afraid the answer would be no if she did ask, and it's often easier to get forgiveness than permission. But if it's not a problem, just give permission and outline when it would be a problem. ("Jane, you're welcome to go home at 4 p.m. twice a week, but no more. When we have client meetings on site, you must stay until 5 p.m. regardless of whether you worked through lunch.")

In other words, many workplace rules are based on assembly-line management. If the person who is at "station seven" goes home, then the work stops. But most jobs aren't like that any more. We don't all have to be standing in a line. Jane's schedule doesn't need to match everyone else's.

If the real problem isn't the employee's early departure, but her nastiness when she's disciplined, then her manager needs to go to the CEO and say, "Whenever I do X, Jane turns into a pouty mess. I know she's been here a long time and the two of you are friends. I'd like to talk to her about her behavior, but I want to make sure you and I are on the same page." If the CEO says, "Oh, that's just Jane," then it's worthless to talk to her about her behavior because she'll get the support and love of the CEO. But chances are the CEO is annoyed by it as much as everyone else is.

Managing people is hard. Even CEOs don't like to upset employees. But while no one should care if Jane goes home an hour early as long as her work is being done, the negative reaction to correction needs to be corrected. That's why we pay managers more -- to do the hard things.