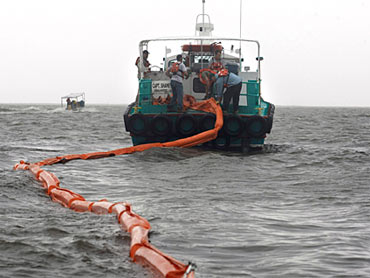 Tom Hayden is a the Nation Institute's Carey McWilliams Fellow. He is a former state senator from California.


The need for greater linkages between the environmental, peace and Wall Street reform movements grow by the day in the face of the epic oil spill caused by British Petroleum, a multinational firm tied to Goldman Sachs and Halliburton in oil wars from the Gulf of Mexico to the Persian Gulf.

Peter Sutherland, chairman of BP's board for the past decade, had headed Goldman Sachs International and, in the 1990s, was a director of the World Trade Organization.

Last year Sutherland touted BP's founders as the "cream of Edwardian society" who organized the Anglo-Persian oil company in 1909 with a concession from the Shah of Persia.

Kicked out of Iraq by former president Saddam Hussein in the 1960s, BP recently has been rewarded with the concession to exploit what "could be one of the largest expansions of crude-oil production ever achieved anywhere", according to the Wall Street Journal.

The BP-Halliburton connection was not only forged in Iraq, but in underwater catastrophes in 2009 in Australia's sea of Timor and explosion two weeks ago of the Deepwater Horizon drilling rig off the southern US coast. Halliburton performed the concrete work that preceded both spills, and the New York Times reports a Halliburton employee has acknowledged "that he made the problem worse" during the Australian spill. As for the recent disaster, Halliburton officials claim it would be "premature and irresponsible to speculate" on the cause.

The Goldman Sachs connection remains to be investigated, but it appears Sutherland had a conflict of interest in his dual roles at BP and the Wall Street giant. BP and Goldman were involved heavily in the 1990s and in 2000 in achieving deregulation of energy futures trades from the previous oversight of the Commodities Futures and Exchange Commission (CFTC). As most crude oil futures trades became deregulated, the price of oil skyrocketed from $18 per barrel in 1988 to $36 in 2000, to $110 in 2008. BP's environmental crimes also include the use of Colombian paramilitaries to protect its jungle pipelines and thousands of air pollution violations at its Carson oil refinery in Los Angeles. BP has asserted that the goal of global warming initiatives should be to stabilize emissions at 500-550 ppm, levels considered shocking by most environmental experts.

And yet despite its status as a serial and dangerous polluter, BP has attempted to cultivate a reputation as a "responsible" oil company, famously rebranding itself as BP "Beyond Petroleum" with a $200 million Ogilvy and Mather advertising campaign in 2000, and known for encouraging "dialogues" and "partnerships" with mainstream environmental organizations like the National Wildlife Federation.

The current oil spill invites a coming together of many social movements, including those inspired by the recent indigenous gathering in Bolivia and mainstream groups with a new opportunity for principled battle against the Obama administration's embarrassing energy legislation which green-lights more off-shore drilling. It remains for progressives to move beyond a single-issue focus to make the connections between Wall Street, war, and environmental destruction.

(The opinions expressed in this commentary are solely those of the author.)
By Tom Hayden:
Reprinted with permission from The Nation