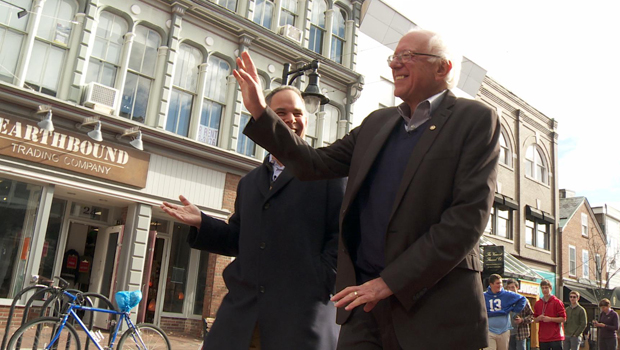 Presidential candidate Bernie Sanders is riding a wave of support that may be surprising to a lot of people, though perhaps not so surprising to the people in his political base , Burlington, Vermont, which is where our Jim Axelrod caught up with him:

The striking thing about Bernie Sanders is not that he's a man whose time has come. It's that he's been waiting so long for his time to get here.

He's even learned to take selfies. "Oh, God!" he laughed. "I can't walk down the street without selfies, yes!"

Sanders on the campaign trail in 2015 sounds, word for word, verbatim what he was talking about in nearly 30 years ago. "We need to radically change the priorities of this nation," he told "60 Minutes" back in 1988. "We have the wealth to provide a decent standard of living for all our people."

"More and more Americans are catching on to what I have been talking about for decades," he said.

Axelrod asked, "Do you feel a little bit of satisfaction? Like, 'Suddenly you people are listening?' Were you waiting for America to catch up with you?"

"Well, I'm glad that it's happening," he laughed.

After 40 years of trying to gain traction with his message, Sanders, the 74-year-old Democratic Socialist Senator and former mayor of Burlington, Vermont, is suddenly dancing with Ellen ...

... and being parodied on "Saturday Night Live" by dead-ringer Larry David:

And yes, Sanders, heard about the sketch. "Who didn't tell me? Like, I heard from 20 different people."

He's now running neck-and-neck with Hillary Clinton in New Hampshire by calling for a revolution:

"The only way we really transform America and do the things that the middle class and working class desperately need is through a political revolution, when millions of people begin to come together and stand up and say: Our government is going to work for all of us, not just a handful of billionaires."

"A political revolution means that we involve tens of millions of people int he political process today to stand up and fight for their rights, to stop the disappearance of the American middle class, and say that our government belongs to all of us and not just a handful of wealthy campaign contributors."


"I'm just wondering if you're misreading what it is the American people want."

"Now here we are, and it looks like you got a little more traction than the experts thought you would. Why?"

"'Cause you and the punditry and the corporate media, you know, have a view of the world which I think is very out of touch with what the American people are feeling."

"No, no, it's not a question of not liking you. I like you. You're a very nice guy!" Sanders said. "What corporate media is about is very often deflecting attention away from the most significant issues facing our country and giving us entertainment all the time.


"And I get upset that media, by and large. is more interested in dumb things that somebody says, or how much money I'm raising. No one cares about that. We gotta focus on the real issues facing America."

If Sanders is the Junior Senator from Vermont, his matter-of-fact style is all Brooklyn, where he was born and raised among working-class immigrants , many of them Jews like himself, whose families had fled discrimination in Europe.

Axelrod asked, "Economic inequality, it's your reason for being. And I'm wondering where that came from."

"I will tell you where that came from. When you're five or six years old and you hear your parents arguing -- and sometimes pretty fiercely -- it's very disturbing to a child. And my parents did, over money, almost always. My father came to this country from Poland at the age of 17 without a nickel in his pocket. He always had a job, but he never made a lot of money. So we were never poor, but we just never had a whole lot of money. I think we were solidly lower middle class."

"But you could have then said, 'You know what? I'm gonna go to medical school and make money.'"

"No, I didn't. I mean, I think from an early age, and again, what I cannot tell you. You asked a fair question, I just don't know the answer, why we turn out the way we do."

It's the rare politician who will admit he doesn't have all the answers. But "uncommon" has been one of the more polite descriptions of Sanders. After all, how many candidates have disclosed they have five-figure credit card debt?

"My wife handles that. I think actually that's been paid," Sanders said. "Look, we do fine financially. A United States Senator makes a good living."

"But how do you get that much credit card debt?

"I actually don't know, you have to ask my wife that. But I think we have paid it all off."

"Do you think in some way that makes you more relatable to the average American?"

"Maybe! That wasn't the intention, I am sure."

He's been with his second wife, Jane, for 34 years. They have seven grandchildren between the two of them.

"We didn't expect it to take off so quickly," Jane Sanders said of the campaign. "I said to him, when we were talking about whether he should run, I'm like, "Isn't there another way you can get the issues out?"


"This is the ultimate 'I told you so' moment in a marriage," Axelrod noted.

And as Jane knows better than anyone, her husband is going to do it his way.

She admitted, "He's not really into the stagecraft. We do try to point it out every now and then, that he needs to pay attention to --"

"But he fights you every step of the way?" asked Axelrod.

"As this campaign evolves," Axelrod said to Sanders, "the extent to which you will need, not to change your message, but to change the delivery mechanism so that it's not 'Eat your peas' -- you run the risk of being too serious?"

"You hate the question?"

"No, no, it's a fair question. I know how to do this stuff: Let me tell you a few jokes, and I know you're too dumb to want to listen to a speech beyond three minutes, so I'm gonna be brief. Vote for me. I'm great. Everybody else is terrible. Have a nice day. I don't do that. Can't be politics-as-usual. I ain't a candidate of the politics-as-usual."

With Hillary Clinton starting to expand her lead in polls nationwide, the stakes are growing ever higher, as Bernie Sanders prepares for the Democratic debate CBS News will host this Saturday.

"You are not running just to get a good speaking slot at the Democratic National Convention?" Axelrod asked.

"No. We are running to win. I fully admit we are the underdogs. We started this campaign at three percent, five percent in the polls. Nobody thought that we could win in New Hampshire, win in Iowa. And yet we're doing well in both of those states, and we're doing well around the country.