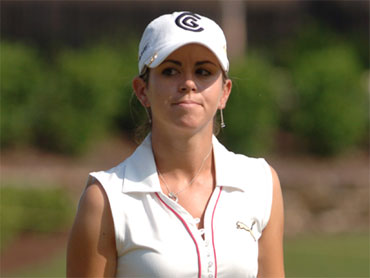 The sudden death last week of pro golfer Erica Blasberg remains a mystery. As the investigation into what killed her continues, family and friends of the 25-year-old gathered at a public memorial Wednesday in Southern California, to celebrate her life.

CBS News National Correspondent Hattie Kauffman reported Thursday Blasberg was once a promising star on the women's professional golf tour. Now, family and friends are grieving her mysterious death, and remembering a passionate competitor with a playful side.

Shane Bacon, a friend, said, "She had fun. She would bounce around on the golf course. She definitely put her emotions on her sleeve when she played."

Scott Walker, a childhood friend, recalled, "She had a laugh about her that was very contagious. Just watching her laugh brought joy to everybody else."

Those who knew her were shocked when Blasberg's body was discovered in her Henderson, Nev. home on May 9. Police are investigating, but have released no information on how she died.

Kauffman noted the information vacuum has been filled by speculation, ranging from foul play to suicide.

What is known is that she had her bags packed for a tournament and a 911 call was placed from her home.

Blasberg got her start as a stand-out at the University of Arizona. In a 2002 interview, she indicated how much joy the game brought her.

Blasberg said at the time, "Being out here with these ladies. I've always looked up to them, if I'd see them, I'd be like 'Wow, look at that' and I'm out here playing with them."

But recently she'd been struggling, earning a career low of $26,000 in 2009. She was reportedly battling illness and depression. Her father said it was the worst year of her career.

Kauffman said a coroner's report could provide answers, but blood and tissue results may take another month.

Blasberg was laid to rest in her hometown of Corona, Calif. CBS News Legal Analyst Lisa Bloom said on "The Early Show" Thursday it's unusual that no information has been released to Blasberg's family about the cause of her death.

Bloom said it's common for police to want to keep some information private when there's a death or a criminal investigation being conducted. However, offering no indication of how she died or who made the 911 call, she said, is "strange."

Bloom said Blasberg's parents "ordinarily would have a right to know (what's going on), although not necessarily at the beginning of an investigation. But as a matter of policy, standard operating procedure, most police departments would be to, at that time, take the parents aside and give them some indication what have they know. For example what was the condition of her remains, who was the person that called 911, to give them some comfort at this awful time."

But Bloom said that report won't reveal why she died.

"It may only reveal how she died," Bloom said. "For example, if she died from a drug overdose, that doesn't tell us whether it was an accident, whether it was intentional, what conversations she may have had with family or friends prior to her death. That's the kind of information her parents surely want that the point."

So is it standard to ask for a toxicology report?

Bloom said, "It's certainly not standard to ask for a toxicology report, and at a time with overburdened crime labs, those investigations can be expensive. So I would assume from that, that the police found some indication, perhaps prescription drug bottles, perhaps something in the condition of her body that led them to believe that toxicology results would give further information about the cause of her death."

As for the circumstances surrounding her death, Bloom said the fact she was planning for a trip is of some interest.

She explained, "Ordinarily somebody isn't planning on going on a trip at the same time that they're planning a suicide. And most suicides are planned, especially by young women."

Bloom added that no note has been discovered, so far, nor any message that she wanted to end her life.

"It's a big stretch to me to go from depression to suicide," she said. "Many people are depressed; many people have problems in their lives. But very few commit suicide."