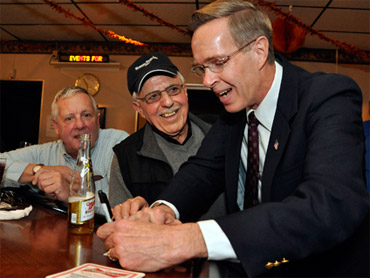 (CBS/ AP)
Conservatives overreached, and Tip O'Neill's dictum reins supreme. That special election in New York's 23rd congressional district turned out not to be worth all of the sound and fury.

The fact is that the district IS special. Since the Civil War cannons fell silent, it's never been occupied by a Democrat. It's one of the largest districts east of the Mississippi and one of the whitest. It is about $8,000 poorer, per person, than the American average.

The fact is that Dede Scozzafava was well-suited to represent the district. She didn't face a primary; she was chosen by a small group of party leaders. That would have been OK, except that an ambitious, slightly disheveled but avuncular accountant named Doug Hoffman got really really angry. Why did party have to anoint Scozzafava, he wondered. He began looking for ballot position at the same time that New York's Conservative Party came looking for an anti-gay marriage candidate to plant roots in the district.

Across the country, conservatives began to take a look at the race. The Club for Growth released a poll that showed a statistical dead heat. The Washington-based anti-tax pressure group endorsed Hoffman four days later. The next week, they ran an expensive television ad campaign on his behalf.

All told, the Club would be responsible for $1 million of the $3 million Hoffman would ultimately spend. The Club's notice attracted the attention of other economic conservative lights, like Steve Forbes and the former house majority leader Dick Armey. Glenn Beck's radio program and Fox News Channel turned Hoffman into a hero of sorts when the party establishment began to fire back: no less a leader than Newt Gingrich warned conservatives to, in essence, close their mouths and support the party's choice.

Doing otherwise, he implied, was disloyal and would help the Democratic Party maintain its majority. Gingrich implied that Hoffman was a bad fit for the district. That implication was a challenge that conservative activists accepted. Suddenly, Hoffman became the talisman for anger at the GOP establishment in Washington, anger at the big spending ways of Democrats in Congress, anger at the media -- a way to clear through a bundle of different resentments that tend to be shouldered by a party that has lost his way. 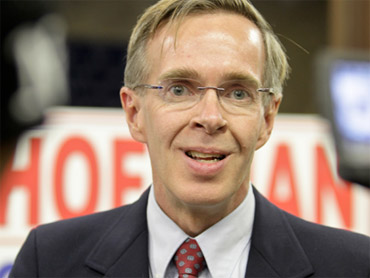 (CBS/ AP)
And yet, despite all this attention, Hoffman lost. Voters in the 23rd did not embrace his philosophy. They saw Hoffman as a carpetbagger -- he didn't even live in the district -- who was trying to hijack their district for his own ideological ends.

This is a Republican district, but it's not a terribly conservative district. It's genteel, more than activist. The final straw: Hoffman didn't even try to pretend that the election was about the issues of the district. It was all about him -- and what he represented. In a way, NY 23ers took to Hoffman like Iowans took to Democratic presidential candidate Howard Dean in 2003. They wanted a representative, not a movement candidate. They didn't take kindly to all these outsiders telling them how to work.

Nevertheless, conservative activists are warming up. Hoffman was never an ideal candidate for them. He's an accident; he may turn out to be a gifted policy maker, but no one has him pegged as a spokesman or leader of the Republican Party or the conservative movement. But Hoffman was a great warm-up for what be a huge prize: a United States Senate Seat from Florida.

Not only is the chosen establishment candidate there, Gov. Charlie Crist, distrusted by conservatives, but his approval rating in the state has begun to crater. And his opponent -- his Doug Hoffman -- is a real talent: Marco Rubio, the former speaker of the Florida House.

Young, Hispanic, bilingual, not yet 40, smart -- he has almost limitless potential. He resists characterization as another ol' conservative knuckle dragger. He's got the de jure endorsement of former governor Jeb Bush, which means that he also has enormous fundraising potential. And Charlie Crist is not so much a liberal Republican as a political neuter.

Where Rubio is neatly positioned, a few other candidates are vying to be Hoffman's heir, including Chuck DeVore, a conservative Senate candidate for California. He's running against a handpicked, not terribly conservative Republican in former Hewlet-Packard CEO Carly Fiorina, who has no grassroots support. The Democratic incumbent in California, Barbara Boxer, will be tough to beat, which is one reason why Rubio, who would vie for an open seat in Florida, has an edge.