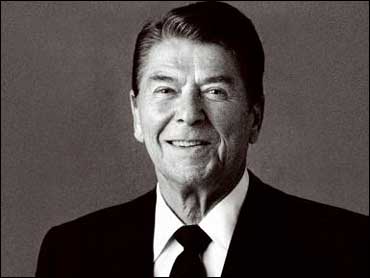 This column was written by Weekly Standard's Duncan Currie

"You say that you're a full-scale Ronald Reagan Republican, and yet, as you mentioned, you opposed the troop surge and you support comprehensive immigration reform. Are those the stands that Ronald Reagan would take?" Thus did Fox News debate moderator Chris Wallace put Senator Sam Brownback on the spot last Tuesday night in South Carolina. Brownback quickly dodged the Iraq question before noting that Reagan himself endorsed a de facto "amnesty" for illegal immigrants in 1986.

As Fareed Zakaria points out, the Gipper had earlier commented, in a 1977 radio broadcast, on the dearth of apple pickers in New England. "It makes one wonder about the illegal-alien fuss," Reagan said. "Are great numbers of our unemployed really victims of the illegal-alien invasion, or are those illegal tourists actually doing work our own people won't do?" Of one thing he expressed certainty: "No regulation or law should be allowed if it results in crops rotting in the fields for lack of harvesters."

So one could plausibly argue that Reagan would have favored the Senate immigration deal announced last week. Or one could argue that the context has changed since 1986, and that he would have eschewed a second "amnesty" bill.

This gets to a broader irony: Though "Reaganism" has taken on an outsized role in the GOP presidential campaign, it's tricky to define just what the phrase "Reagan Republican" actually means in 2007. Reagan won election at a time when the most pressing foreign policy dilemmas included U.S. hostages in Iran, Soviet adventurism, and creeping Communist expansion in Central America. With the partial exception of Iran — partial because the mullahs are still in power and still holding American captives — those concerns are now obsolete. So are the problems of double-digit inflation and gas lines.

On the most important issue of the day, the war in Iraq, we can only guess at what the 40th president would have thought.

But the nifty thing about Reagan's legacy is that every segment of the GOP coalition can claim a piece of it. Libertarians can cite his small-government rhetoric. Supply-siders can emphasize his tax cuts. Defense hawks can highlight his arms buildup, his willingness to use military force (in Grenada and Libya), and his "evil empire" talk. Social conservatives can point to his 1983 pro-life tract, "Abortion and the Conscience of the Nation," and his promulgation of the so-called Mexico City Policy (which bans U.S. funding of foreign NGOs that promote or perform abortions). Moderate Republicans can stress his sunny disposition and big-tent philosophy. All these groups can celebrate his anti-Communism.

As the first two GOP presidential debates have shown, Reagan remains emblematic of American conservatism. By one count, the candidates invoked his name 19 times during their debate at the Reagan Library. Conscious of their vulnerability on the right, Rudy Giuliani, John McCain, and Mitt Romney have all made bids for the Reagan mantle. Their fallback question seems to be: "What would Reagan do?"

Of course, Reagan's White House record was far more varied than many conservatives now care to admit. An artificial "Reagan reverence" may make for good primary politics, but it also threatens to constrict Republicans. As David Brooks writes, "Conservatives have allowed a simplistic view of Ronald Reagan to define the sacred parameters of thought. Reagan himself was flexible, unorthodox, and creative. But conservatives have created a mythical, rigid Reagan, and any deviation from that is considered unholy."

Reagan was indeed a tax cutter — except for the few times he raised taxes, including in 1983 as part of a Social Security compromise with Democratic House Speaker Tip O'Neill. He wanted to scale back entitlements — except that the 1983 compromise expanded them. He believed in balancing the budget — except that he left office with huge deficits. He was a free trader — except when he slapped tariffs or "voluntary" quotas on a range of Japanese imports. He was a convert to the pro-life cause — except that two of his Supreme Court nominees went on to co-author (along with Justice David Souter) the 1992 decision which reaffirmed Roe v. Wade.

He refused to bow to terrorism — except when the slaughter of 241 U.S. servicemen chased him out of Beirut, or when his administration (with or without Reagan's knowledge) traded arms for hostages in the Iran-Contra affair. He rebuffed calls for a nuclear freeze — except that he later came out publicly as a nuclear abolitionist. He pursued a hard line with Moscow — except when he offered Gorbachev a "no nukes" pledge (the so-called zero option) at Reykjavik, much to the dismay of Margaret Thatcher, and then embraced arms-control diplomacy whole-hog. Speaking of Thatcher, Reagan was a staunch supporter of the U.S.-U.K. "special relationship" — except when he hesitated before backing Britain's position on the Falklands in 1982, giving undue deference to the thuggish (but anti-Communist) Argentine junta.

Though some of these discrepancies may seem to dent Reagan's stature, that is hardly the point. A 2005 survey of ideologically diverse scholars by the Wall Street Journal and the Federalist Society ranked him as the sixth-greatest president of all time: ahead of both Truman and Eisenhower. In big-picture terms, Reagan was a very conservative — and very successful — chief executive, who dragged the entire political spectrum rightward.

But the received wisdom about Reagan tends to be somewhat one-dimensional. Had he truly been as doctrinaire and unwavering as many now seem to imagine he was, chances are he would have been less popular. As Norman Podhoretz once remarked, "Ronald Reagan was much more of a conventional politician than he was taken to be. It is this that explains why he could so often compromise and sometimes violate even key elements of his putatively rock-bottom convictions; or why he tried mightily to pretend both to his friends and his opponents (and in some instances to himself as well) that he was doing no such thing; or why he was even willing to reverse course altogether for the sake of victory."