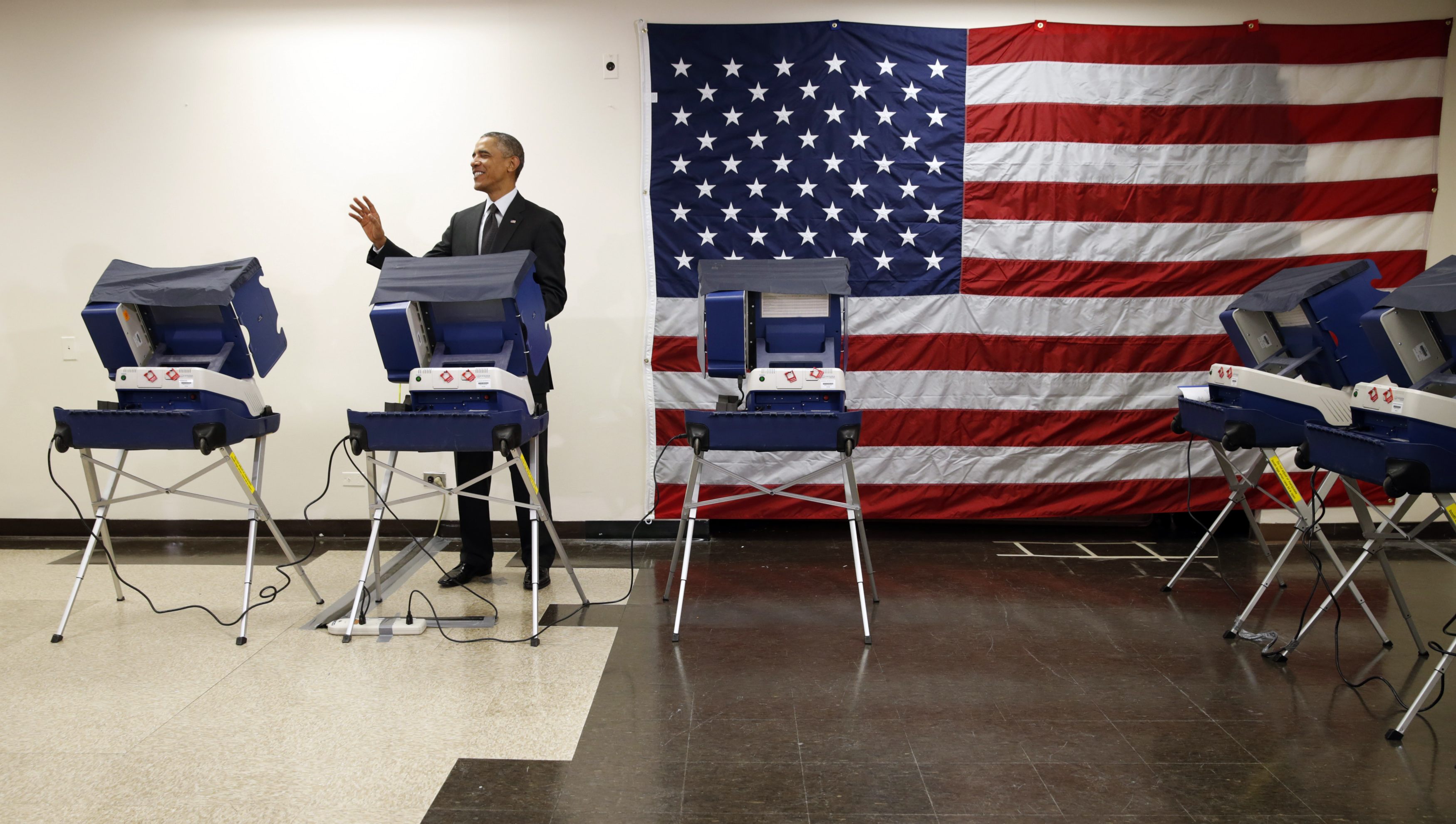 A week ahead of the midterm elections that will decide control of Congress, Congress' approval rating remains overwhelmingly negative. Just 14 percent of Americans approve of the job Congress is doing, while 76 percent disapprove. These ratings match what they were four years ago, heading into the 2010 midterm elections.

Dissatisfaction with Congress is reflected in the very low percentage of voters who think most members of Congress deserve re-election. By a lopsided margin, voters continue to think most members of Congress do not deserve to be re-elected. They are more positive about their own representative, but still a majority of voters thinks it is time for a new person in their district.

Heading into the midterm elections, President Obama's approval rating is 39 percent--just a bit higher than George W. Bush's in the fall of 2006, when Democrats took control of the House and Senate.

Mr. Obama's approval rating is considerably lower than both Ronald Reagan's and Bill Clinton's at this point in their presidencies. The President's party typically loses seats in a midterm; one exception was in 1998, during Bill Clinton's presidency, when the Democratic party gained seats in the House.

At 39 percent, Mr. Obama's approval rating is just two points above his all-time low reached nearly a year ago. 51 percent of Americans disapprove. More Americans approve (47 percent) than disapprove (41 percent) of how President Obama is handling the threat from Ebola. But Americans give the President lower marks on other issues. A majority of Americans disapprove of how President Obama is handling the economy, and he gets net negative ratings for his handling of terrorism (41 percent), the threat of ISIS (38 percent), and foreign policy (34 percent).

Republicans continue to hold a lead in the national Congressional ballot test: 47 percent of likely voters say they will support the Republican candidate in their district, while 40 percent support the Democrat.

About nine in ten Republicans, and a similar percentage of Democrats, say they support their party's candidate for the House of Representatives. Independents are supporting the Republican candidate.

Thirty-two percent of voters are paying a lot of attention to the campaign, a figure that has steadily risen since September, and is similar to the percentage who said the same four years ago.

Voters continue to choose the economy (38 percent) as the most important issue in their vote for Congress this year, followed by health care (23 percent and terrorism (11 percent).

Most Important Issue in Your Vote

Most voters choosing between the country's two major parties say that the main reason they are supporting their candidate is because of his or her positions on the issues. The candidate's party and personal qualities are far less likely to be chosen.

More broadly, national issues (51 percent) will matter more than local issues (37 percent) this fall; this is the case for both Republicans and Democrats.

Voters do give the Democratic Party a lead over the Republicans on caring about the needs and problems of people like themselves.

Fifty-eight percent of Americans think the condition of the national economy is at least somewhat bad, while just 40 percent characterize it as good. Though down slightly from earlier this month, positive views of the economy have slowly improved overall since the onset of the financial crisis in October 2008.

Two in three Americans (66 percent) continue to think the country is off on the wrong track, while just over a quarter (27 percent) think it is headed in the right direction. Optimism on this measure has slid significantly from what it was two years ago, but is much higher than it was in October 2008.

And Americans show considerable skepticism about the federal government's ability to do the right thing. 73 percent of Americans say they trust the government to do what is right only some of the time. This percentage is identical to what it was a year ago, and even higher than it was right before the 2010 midterm elections.

Moreover, three in four Americans are either dissatisfied (50 percent) or angry (24 percent) with how the federal government is working. Just 24% are either satisfied or enthusiastic, though this percentage is up slightly from December 2011.

When asked, in general, if it is better to have the President and Congress from the same or different parties, more voters prefer the same party (48 percent), rather than divided control (37 percent). But these views are colored by partisanship -- which has been the case historically. Most Democrats, who control the White House, would rather have Congress and the President of the same party, while Republicans are more inclined to prefer divided control. In years when Republicans had the White House, Democrats wanted divided government.

The 2014 elections are on track to be the most expensive midterm elections in history, and Americans express strong opinions about money and politics in this poll. Eight in 10 think that spending by outside groups on political advertising should be limited. Majorities of all partisan stripes would like to see this type of spending restricted. Along similar lines, 76 percent of Americans think individual contributions to political campaigns should be limited.

This poll was conducted by telephone October 23-27, 2014 among 1,269 adults nationwide, including 1,079 registered voters. The sample size for likely voters is 624. Not all likely voters are assigned the same probability of voting.