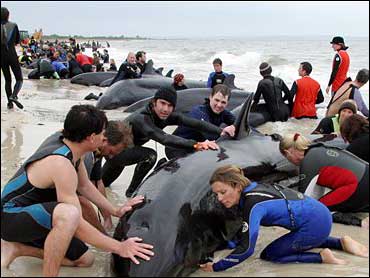 Dozens of volunteers in wet suits and wooly hats braved chilly seas Thursday to push scores of false killer whales that had beached themselves on Australia's western coast back out to sea.

One of the dolphin-sized mammals died, but rescuers refloated 74 others.

Two groups of the marine mammals ran aground on separate beaches at Busselton, 140 miles south of the Western Australia state capital of Perth.

Volunteers responding to the state government's call for help pushed one group of about 15 whales back into the ocean and were holding them in shallow waters while the animals regained their strength.

The rest of the whales were herded back into the water a short time later, said Greg Mair, of Western Australia's Department of Conservation and Land Management.

Whales have stranded themselves in the area before, and scientists are at a loss to explain why.

Volunteer Deidre Beckwith said she was shocked at the scene when she arrived at the beach.

The whales "are very heavy, and they keep moving against us. They are confused," Beckwith told the Australian Associated Press. "It was extraordinary to see it, but it is nice to be able to help them. We just hope they survive."

One 16-foot-long whale died before it could be pushed to sea.

False killer whales, or pseudorca crassidens, have a history of beaching on the Australian west coast. In 1986, 114 beached near Augusta, south of Busselton. Of those, 96 were returned to sea and the remainder died.

In April, a pod of 19 pilot were stranded on a beach near Busselton for more than a day before most of them were coaxed back to sea. Six died.