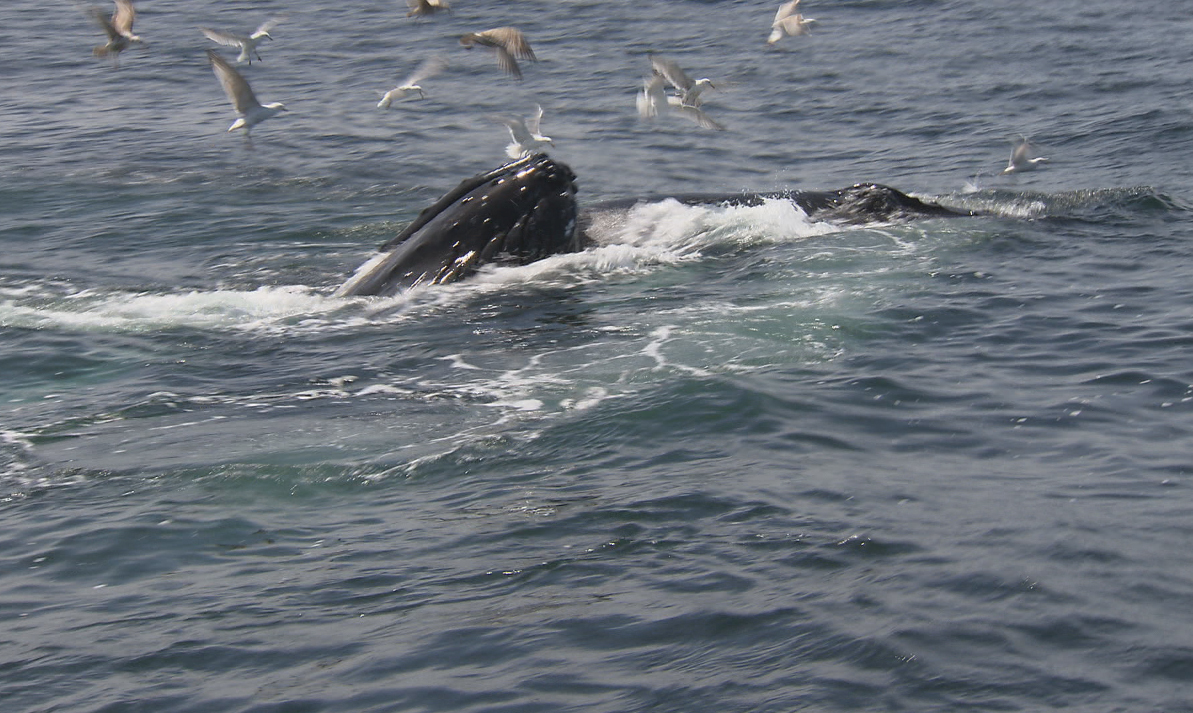 Once Hurricane Arthur passes, thousands of people could be headed back to the ocean for whale watching tours, CBS News Correspondent Vinita Nair reports.

Seeing a humpback whale burst out of the water right in front of you seems like a once in a lifetime experience. But whale sightings are way up this summer, with hundreds of whales being spotted everyday.

Passengers aboard packed whale watching cruises are seeing at least 20 each trip.

"He's gonna come right out through that circle with his mouth wide open," NOAA researcher Dave Wiley commented on a boat just off the coast of Cape Cod, Massachusetts.

"I counted about 18 humpbacks and 8 to 10 finbacks," Wiley said, tallying the whales he saw in just one day. "But there are many more in distance, so I would guess 30 to 40 humpbacks and probably 10 or 15 finbacks"

"This is what they're going after," Wiley said. "It's a small fish called a sand lance."

Wiley said, last year, there were hardly any whales, because there were no sand lance, the tiny eel-like fish that humpacks feed on.

The tiny fish is responsible for so much in terms of the ecosystem.

"No one has ever heard of them and we know almost nothing about them," Wiley said. "That's one of the real puzzles for us: why are they here some years and some years they are not."

So Wiley and his team of researchers decided to follow the fish in the water, using one camera they could control and borrowing "critter cams" from national geographic, to tag some unlikley camermen; whales.

"We have a tag on a long pole that has suction cup on it. We approach very carefully," Wiley said.

The video showed sand lance darting around in schools, and burrowing in the seabed to hide from predators. But as researchers watched the deep water footage from the whales' point of view, they discovered something else. The 40 ton whales were hunting together, blowing bubbles to corral sand lance, like fishermen using nets.

"So they will start down maybe 20 meters and then start swimming a spiral and they are emitting bubbles out of blowhole or mouth," Riley said. "They will make this nice choreographed circle, spiraling effect as they come to the surface and open their mouths and grab as many sand lance as they can. It's amazing the complexity of their behavior."

The whales will leave by the end of summer in search of warmer waters. Wiley says he doesn't know if the sand lance will return or if the humpbacks will surface next year.

Each humpback whale can eat up to one million sand lance each day. And because of the number of whales, coast guards and marine biologists are warning boaters this summer to take extra precautions while these majestic creatures feast off our shores.