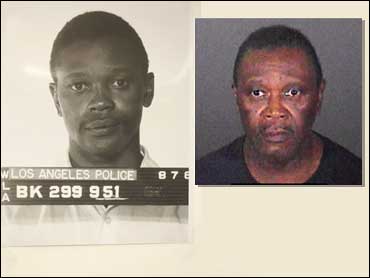 LOS ANGELES - A former state insurance adjuster dubbed the "Westside Rapist" by police was sentenced to life in prison Friday for murdering seven women in sexual attacks that terrified Los Angeles in the 1970s and 1980s.

John Floyd Thomas, 74, pleaded guilty to seven counts of first-degree murder and was sentenced to seven life terms, including one without the possibility of parole in the attacks, Los Angeles County district attorney's spokeswoman Sandi Gibbons said.

Some of the murders included special allegations that the crimes were committed during the commission of burglary or rape.

A call to Thomas' court-appointed public defender, Alan Gelfand, was not immediately returned.

Based on cold-case DNA testing, Thomas was arrested in March 2009 and charged in the "Westside Rapist" case in which a man entered the homes of middle-aged and elderly women who lived alone, raped them and choked them until they passed out or died.

Although he was charged with seven murders, investigators have said they believe he may have killed as many as 30 women and raped many more.

The attacks stopped in 1978 — the year Thomas went to prison for the rape of a Pasadena woman — but authorities say they resumed a decade later in the eastern county.

Thomas initially was charged with the 1972 murder of Ethel Sokoloff, 68, at her home in the Mid-Wilshire area of Los Angeles and the 1976 murder of Elizabeth McKeown, 67, in the Westchester area.

Sokoloff, a retired school administrator, was found semi-nude and dead inside the trunk of her car two blocks from her apartment.

Thomas later was charged with killing Cora Perry, 79, in the unincorporated Lennox area in 1975 and with the 1976 Inglewood killings of Maybelle Hudson, 80, Miriam McKinley, 65, and Evalyn Bunner, 56.

He also was charged with killing 56-year-old Adrienne Askew in 1986 in Claremont, about 40 miles east of Los Angeles. At the time of that killing, Thomas was living in Chino, a community only a few miles away.

The killings again appeared to stop in 1989, when Thomas took a job with the state workers compensation insurance agency in the Los Angeles suburb of Glendale.

As a registered sex offender, he was required to check in annually with police. During one visit in the fall of 2008, officers took a saliva swab to collect his DNA, which is a requirement for all sex offenders.

Cold-case investigators later used the swab to link Thomas to the killings.