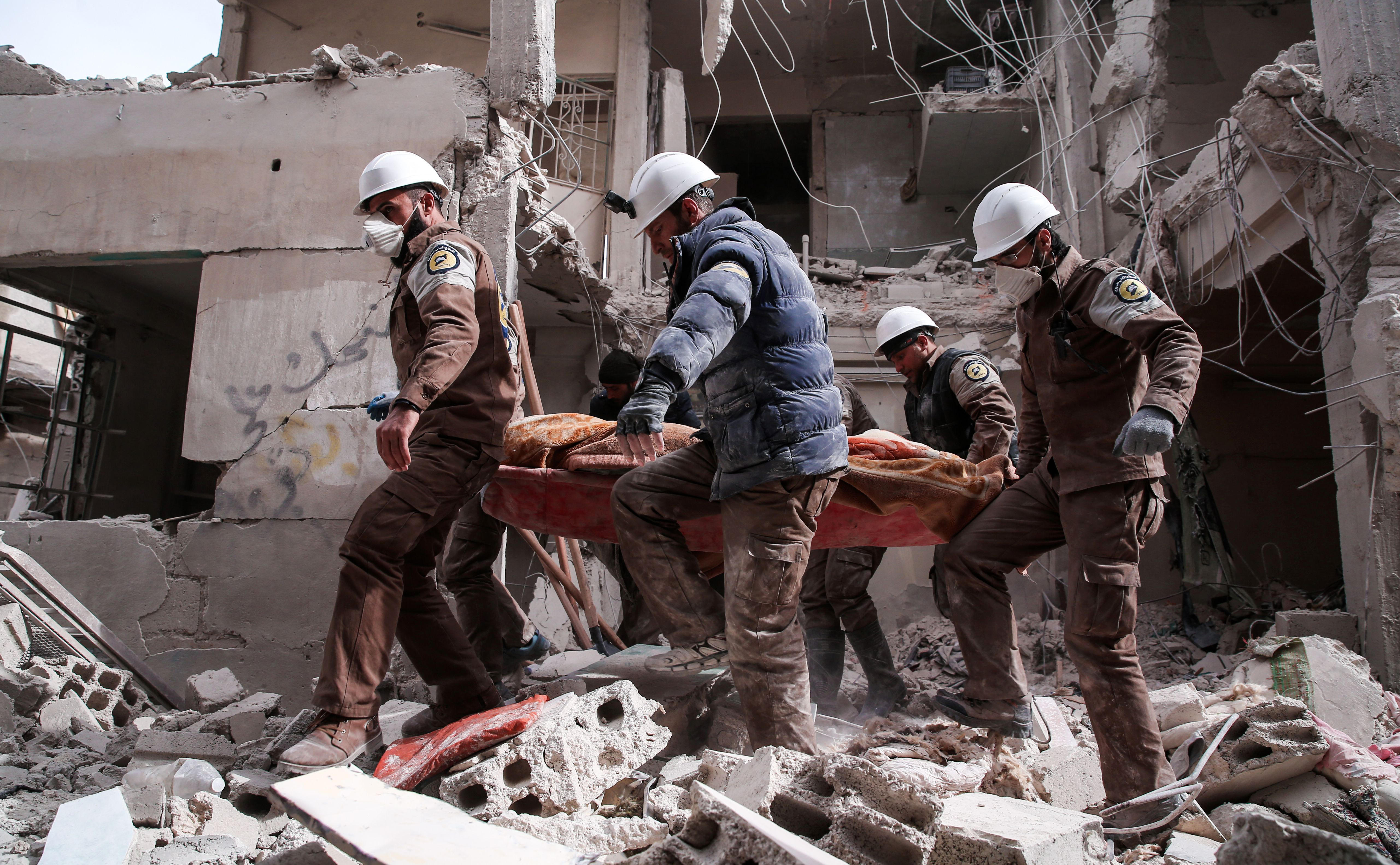 As Syrian leader Bashar al-Assad's regime violently assaults the southern region of Syria, an area formerly protected by the Trump administration, the members of the all-volunteer rescue organization known as the White Helmets are in danger of assassination. Once favorites to win the Nobel Peace Prize for their life-saving efforts in rebel-held territory throughout Syria's brutal seven-year war, these rescue workers are now in need of rescuing themselves.

CBS News has learned the question of how to extract the emergency workers was raised with President Trump in multiple conversations with allied countries on the sidelines of the NATO summit. The Netherlands, U.K., France, Canada and Germany are scrambling to find a way to save the lives of an estimated 1,000 volunteers and their family members. Around 300 of them are considered to be in imminent danger.

In a statement to CBS News, the Trump administration acknowledged its concern for the White Helmets, but stopped short of commenting on efforts to rescue them.

"We are concerned about the humanitarian situation in the southwest since the Syrian regime and Russia violated the ceasefire," National Security Council spokesperson Garrett Marquis said in a statement to CBS News' Margaret Brennan. "This includes the hundreds of thousands of people fleeing the fighting.  Among them are many who fear regime reprisals, including specific groups, such as the White Helmets. We are pushing for Russia and the regime to allow international aid convoys to deliver badly needed assistance to the civilians in the Southwest."

Prime Minister Theresa May personally brought up the emergency issue during her meeting with Mr. Trump in the U.K. Formally known as the Syrian Civil Defense group, the White Helmets expect to be marked as resistance targets and slaughtered by Assad's forces, which are backed by Iranian and Russian firepower.

"They are promising no retribution on anyone in the southwest but nobody trusts or believes that," a senior U.S. official told CBS News.

The emergency talks were triggered in recent weeks as aid groups working with the White Helmets struck an increasingly alarmist tone as they watched Assad's forces close in on territory that Russian President Vladimir Putin and Mr. Trump had once agreed would be part of a U.S.-protected safe zone. Despite that 2017 agreement to carve out safe zones, the Trump administration decided not to take action to stop the current military assault.

Sources tell CBS News that the issue may come up when Mr. Trump meets with Putin on Monday.

U.S. officials and Western diplomats, however, say that this evacuation has not been formalized on the agenda because they are not sure if the Russians can be trusted to help. Moscow has labeled the White Helmets a terrorist group and lead a disinformation campaign against them -- even claiming that their video evidence of Assad's brutal chemical and conventional attacks on civilians was falsified.

Ideally, the countries would find a way to facilitate an escape without having to ask for Putin's help. Dozens of ground escape routes are being explored at this time, according to a Western diplomat. But roadblocks stand in the way at every turn, especially given the fast pace of the Syrian regime's assault. If a ground evacuation is not possible, Russia would need to be involved in an air escape.

But Putin, who is a close ally of Assad, does not have a reliable track record of following through with diplomatic agreements in Syria. That is why the diplomats studying this complex evacuation have not decided whether or not the topic will be breached during the presidential summit.

"We are not there yet at all in terms of firming up the necessity to have a discussion with Putin," explained a Western diplomat. "If we run out of options, and the only option left is the Russians, then it is worth pursuing."

There is no guarantee that the Kremlin won't use information about the White Helmets' exact whereabouts to enable their slaughter, rather than to save them.

One other complication: the U.S. travel ban specifically bars Syrian nationals from entering the United States. The Trump administration has offered to provide financial help to those who are successfully evacuated but has refused to allow any of them to seek safe haven on U.S. soil. Canada is said to be in consideration as a place for them to resettle. Neighboring countries of Jordan and Israel, which recently shut their borders to fleeing refugees, would also likely play a role.

Last year the Trump administration was able to strike an agreement with Russia and Jordan to establish a de-escalation area or so-called safe zone. It was announced as a breakthrough agreed to personally by Presidents Trump and Putin when they met on the sidelines of the G20 summit in Hamburg, Germany. Yet Russia has broken that agreement in enabling the Assad regime's expanding military assault in that exact area.

So far, the U.S. government has not taken action to stop this offensive. As a result, refugees and U.S.- backed rebels are left without protection. Earlier this month the U.N. estimated the recent violence had left 750,000 lives are in danger and displaced more than 320,000 people in southwest Syria.

Mr. Trump has declared that he wants to see a quick exit from Syria and signaled that he wants to draw down the roughly 2,000 U.S. troops advising and assisting local fighters. His freeze on emergency assistance appears to have thawed. After withholding all support for the White Helmets earlier this year, the administration authorized $6.6 million in assistance for the group last month.
But there is still no movement on the additional $193.4 million for stabilization funding for Syria as a whole, which was put on hold earlier this year.

This recent effort to get the White Helmets out of the country is in keeping with the administration's plans for complete withdrawal.

"This effort says we are in the evacuation phase. It is an admission that the regime is going to regain control of the country and the White Helmets can't remain," said a U.S. government official. "Or else the regime will take repercussions on them."

Even if this effort does succeed, Syrian opposition leaders on the ground are wary of more bloodshed in Syria. They say that evacuating the rescue fighters would be have an impact on some Syrians, but only minimally, and they think there is no way to rescue all the Syrians that the Assad regime will target.

"Daraa is the cradle of the revolution. It is where protests began," Raed Fares, a citizen journalist and activist in Syria, told CBS News. "There are not just the White Helmets in Daraa. There are more than 1 million people there. And all of them are targets for the regime."

Fares, who has faced three murder attempts and been kidnapped 5 times since the civil war broke out, was in Washington last week meeting with officials at the White House, the State Department and on the hill. He has supported civil society in Syria with tangible action -- including the launch of a radio program, four women's centers and 12 children centers. He talked with CBS News about his D.C. meetings.

"We love you,' they told me," Fares said wryly, indicating in his expression that these were not statements he took at face value. "But they said it was all Mr. Trump and [Secretary of State Mike] Pompeo." No one could assure him that the U.S. would be providing additional support on the ground, beyond limited efforts to get out some of the White Helmets.

Fares and many Syrians are worried that with the Trump administration's withdrawal of support for civil society in the country, other countries will follow suit. But Fares says he will stay, and he will keep fighting Assad.

"It is going to turn into a massacre again. Maybe worse than before. Assad is going to come for Idlib next," Fares said of a city in northwest Syria which is still held by Syrian rebels. "But I will not leave. Even if I have no money, I am not going to stop."