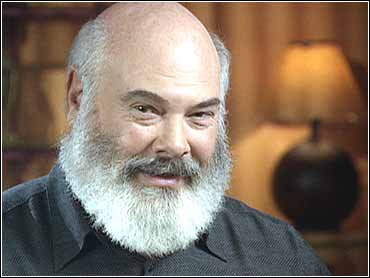 Its advocates have always said LSD clears the mind, but now Andrew Weil says it cleared his sinuses as well.

Dr. Weil, the Harvard-educated proponent of alternative health therapies, told Ed Bradley that his life-long allergy to cats was cured by a dose of LSD.

”I took LSD,” he says. ”I was in a wonderful outdoor setting. I felt terrific and, in the midst of this, a cat came up to me and crawled into my lap. I did not have an allergic reaction to it and I never did since.”

Weil says that some allergies are learned. ”That gave me the idea that [taking LSD] would be a great way to teach people to unlearn allergies,” he says. ”If the drugs were legal, I think I would recommend that some patients do it.”

Weil has been called a shaman, a medical holy man, a magician and a host of other terms by his critics. ”I don't know about a holy man, how about wizard? I'll settle for wizard,” he says.

Weil is extremely popular and on the leading edge of an alternative medicine movement that stresses that, in some cases, herbs, mind therapies and special diets can help or cure illnesses - even cancerous tumors. Weil claims to have been immediately cured of a sore throat by an energy healer. ”The influence of belief on the body, this to me is magical…wonderful,” he says.

One of Weil's teachers has problems with his former student's ideas. ”What I take Andy to task for is that he allows people to believe that very often you can cure these serious physical ailments by belief and mysticism…There's not a shred of evidence that it's so,” says Dr. Arnold Relman, professor emeritus at the Harvard Medical School.