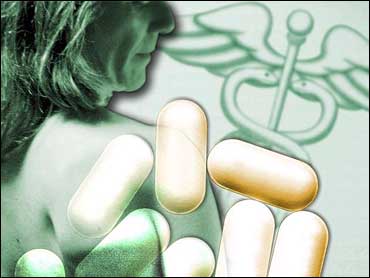 "Paying for fad science is a good way to lose cash, not pounds," FTC Chairman Deborah Platt Majoras said of the products, which advertised heavily on television, in magazines and on the Internet.

Majoras said the products would remain on store shelves, but the companies, which often used endorsements from celebrities like Anna Nicole Smith, would have to stop making the claims.

"Testimonials from individuals are not a substitute for science," she said. "And that's what Americans need to understand. The marketers are required to back up the claims with the science, and if they can't do that they can't make the claim."

Fines were levied against marketers of Xenadrine EFX, One A Day Weight Smart, CortiSlim and TrimSpa. The companies all say they have accepted the FTC fines, but without admitting guilt or accepting liability, CBS News correspondent Sandra Hughes reports.

Majoras said that some of the money paid as civil fines would be returned to consumers. "We always try to get money back when consumers have been deceived," she said. "In this instance, I'm pleased to say that I believe we're going to get millions back from some of these products to be able to return it to consumers."

The FTC's complaint against two marketers of Xenadrine EFX — which contains green tea extract (EGCG), caffeine, and bitter orange (Citrus aurantium), among other ingredients — alleged that false or unsubstantiated claims were made, including that the product was clinically proven to cause rapid, substantial weight loss, and was more effective than leading ephedrine-based diet products. In fact, several studies showed that Xenadrine EFX failed to produce substantial weight loss. In some cases, subjects taking placebos over a 10-week study lost more weight.

The marketers will pay at least $8 million and as much as $12.8 million to settle the allegations, and will also pay at least an additional $22.75 million in an unrelated bankruptcy case, settling claims brought by creditors and consumers.

Seven marketers of CortiSlim and CortiStress will settle FTC charges over claims their products reduce weight permanently as well as prevent or lessen the risk of serious health conditions, such as osteoporosis, obesity, diabetes, Alzheimer's disease, cancer and cardiovascular disease. Many of the claims were made in deceptive television ads formatted as talk shows rather than commercials. In total, assets worth at least $12 million (including houses and boats purchased with company profits) will be recovered, to be used for consumer redress.

But critics call the FTC's actions a slap on the wrist to companies that make hundreds of millions. None of the four products will be taken off the shelves, Hughes reports.

"We need better laws, the one thing that I hope comes from this is the recognition and interest in regulating these kinds of products," said Dr. Louis Aronne, director of the Comprehensive Weight Control Center in New York City, and a professor at Weill-Cornell University Medical College.

According to the FTC, companies selling TrimSpa made claims for "painless" weight loss unsupported by scientific evidence, such as that one ingredient, Hoodia gordonii, enabled consumers to lose weight by suppressing appetite. Ads for TrimSpa's "Completely Ephedra-Free Formula X32" contains testimonials, such as celebrity endorser Anna Nicole Smith, who claimed to have lost 69 pounds in eight months from using TrimSpa.

In addition to paying $1.5 million, TrimSpa's marketers — Goen Technologies Corp., Nutramerica Corp., TrimSpa, Inc., and Alexander Szynalski, also known as Alexander Goen — are prohibited from making any claims about health benefits, performance, efficacy, safety, or side effects of its products unless the claims are backed by scientific evidence.

The Bayer Corporation will pay a $3.2 million civil penalty to settle FTC allegations about claims made in ads for One-A-Day WeightSmart multivitamins, such as that the product would increase and enhance metabolism, and prevent weight gain associated with declining metabolism of people over age 30.

Efforts to reach the product manufacturers were not immediately successful.

Majoras cautioned the estimated 70 million Americans trying to lose weight not to turn to pills.

"You're not going to find weight loss in a bottle of pills," she said.