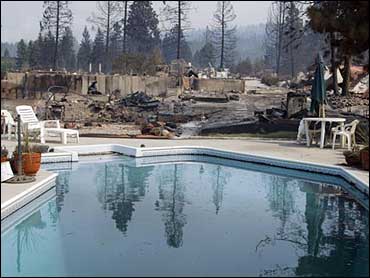 Cooler temperatures and milder winds on Sunday helped firefighters contain a blaze that has destroyed more than 200 homes and forced thousands to be evacuated in this western Canadian city.

Emergency officials said they had allowed 2,000 evacuees to return to their homes on Sunday. They said 24,000 people had been evacuated from the area.

Some 17,000 others were on evacuation alert, including the people who had been allowed to return to their homes, Kelowna fire department spokeswoman Carol Suhan said.

Temperatures, which dropped as low as 39 overnight, and winds that were down to 9 mph from a high of 45 mph were helping firefighters to keep the flames from spreading.

Winds were forecast to remain mild until Tuesday, and rain was expected Sunday night.

"If the weather holds we can say that (the fire is contained)," Suhan said.

Just under one-third of Kelowna's 100,000 residents had fled the fire since Thursday as high winds swept it past orchards and vineyards and over fireguards built into hillsides.

Leo Gebert, the evacuated owner of Kelowna's St. Hubertus Estate Winery, saw flames creeping between the buildings of his business and welcomed helicopters dumping retardant on the structures.

"As long as they keep doing that, there's hope," Gebert said. "We can't do anything about it so we decided to get out."

No deaths have been reported, but some firefighters have suffered minor injuries, officials said.

Most people had left evacuation centers set up in hockey rinks to lodge in hotels, move in with friends or relatives or hunker down in vehicles, Suhan said.

The cost of fighting the almost 900 fires that have plagued British Columbia this year now tops $106 million, or about $4 million per day.

Pop music diva Cher announced she would donate half the proceeds from her concert in Vancouver on Saturday to the British Columbia Forest Fires Relief Fund. There was no word on the amount.