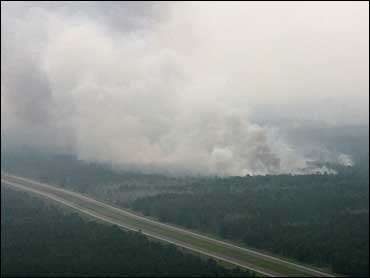 Calmer wind and a sprinkling of rain helped firefighters make gains Thursday on the massive wildfires that have forced hundreds of people to evacuate homes in northeast Florida and southeast Georgia.

"Things are generally better each day," said Jim Harrell, a spokesman for the Florida Division of Forestry.

The two drought-parched states have been battling blazes for weeks, with nearly 300 square miles charred in all. The problem was so serious, Florida Gov. Charlie Crist was looking for salvation from what would typically be a nemesis — a brewing Atlantic storm.

Some of the storm's winds are still whipping northern Florida, though, nursing the fires in the town of Taylor, where a large fire burns less than 100 feet from homes.

That wind has been the problem since Monday, fanning fires and blowing smoke across the dry forests and swamps of Florida and southern Georgia. One fire in Georga has been burning for more than three weeks now and is the largest in state history, CBS News correspondent Kelly Cobiella reports.

Another reason the fires are still burning is that many of them are buried so deep in dense forest and swampland that firefighters can't reach them.

"What we're hoping for is more the wet stuff. If that can come in a little bit, give us some showers, that would be a tremendous help to Florida obviously," Crist told CBS Early Show co-anchor Julie Chen. "In addition, it looks like we're going to get some rain. These horrible floods they had in Iowa recently, some of that front's going to be coming in, we think, the latter part of the weekend or the first part of next week, hopefully giving us some more of the wet stuff to help suppress the drought we had."

Andrea, the first named storm of the year, weakened into a subtropical depression with 35-mph winds Thursday morning, a day after forming. Less than an inch of rain was expected to reach the fire area, but the state still has a good chance of getting dousing rain this weekend from the storm systems that flooded Midwest communities during the week.

Officials tightened lawn-watering restrictions for South Florida residents and golf courses in an effort to offset unprecedented drought conditions. The moves follow a similar decision last month to try to halve agricultural water use in the region.

Across Florida and parts of southeastern Georgia, haze and a burning smell tainted the air Thursday. Seven homes in Florida have been destroyed, several stretches of highway were closed and a dusting of ash coated cars and buildings. Health officials warned the elderly and people with breathing problems to stay indoors.

Crist and Maj. Gen. Douglas Burnett of the Florida National Guard said the state has about 11,000 soldiers available and enough equipment, such as trucks and helicopters, to help Florida through the spring wildfire season. About 1,200 firefighters in the state were battling 236 fires that had charred 87,285 acres — about 136 square miles.

"Florida is prepared. Florida is ready. I don't know any state that is more prepared than Florida," Crist said after the tour.

A wildfire in Baker County, which started when Georgia's largest fire on record jumped the St. Mary's River, kept residents of the tiny community of Taylor away from their homes for a third day.

In Lee County, north of Fort Myers, about 600 residents of a mobile home park were forced from their homes for several hours after a fire sprouted and quickly grew to 20 acres Thursday morning.

Georgia officials issued a mandatory evacuation in southern Charlton County, saying about 300 homes may be in the path of the state's largest wildfire since 1957, when record-keeping began. It started April 16 when a tree fell on a power line near Waycross, Ga., and has burned 107,360 acres — or 168 square miles — of forest and swampland.

Most of Florida's wildfires have been started by lightning, although the Division of Forestry was investigating nine suspected cases of arson.

In Georgia, two boys, ages 12 and 16, were charged with starting small fires there. One of the arrests was made after bloodhounds found a footprint left at the fire scene, according to the Georgia Forestry Commission's arson investigation task force, which made the arrests.

In northern Minnesota, high wind fanned a fire around the Boundary Waters Canoe Area Wilderness. Officials labeled it a "red flag" day, with low humidity making conditions worse. Authorities ordered an evacuation of an area with cabins and lodges along scenic Gunflint Lake, including the landmark Gunflint Lodge.

"We're back to the conditions we had in the first two days of the fire," said Daria Day, a spokeswoman for the agencies fighting the fire, which had burned more than 34 square miles and destroyed about 45 structures since it started Saturday. The shifting winds Thursday put another 100 buildings at risk, fire officials said.

A squad of elite firefighters was taking command of the blaze, which had burned its way into Canada. Nearly 450 firefighters were on the scene Thursday.