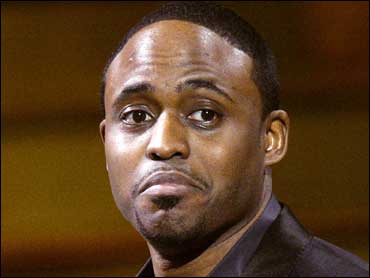 Wayne Brady is savoring a big year, with doors opening to him at Carnegie Hall, the White House and, in multiples, on "Let's Make a Deal."

The actor-singer-funnyman debuted in October as host of a revival of Monty Hall's classic game show, riding herd on eager contestants choosing between cash and the chance of prizes tucked, famously, behind door number one, two or three.

Carnegie was "a wonderful milestone in my life," said Brady, who was backed by the New York Pops orchestra for a salute to Sammy Davis Jr. and Sam Cooke. "To be able to do that and to launch what we hope is a successful game show, a bit of iconic American TV, that's not a bad year."

Hall, a consultant on the new "Deal" produced by FremantleMedia North America, said a number of contenders were considered and rejected for host of the Las Vegas-based daytime show that airs on CBS (check local listings) from the Tropicana hotel-casino.

"We needed someone who could ad lib, be charming, work with contestants and run the show," Hall said. He'd tried to woo Brady before, without success, but this time prevailed.

Brady, who exudes earnest confidence along with that easy charm, says "Deal" represents another step in building a career as an all-around entertainer in the mold of a Davis or Billy Crystal or John Leguizamo.

"I'm an actor first and foremost, who happens to do improv. I've also done sitcoms, I've done stage," he said, with TV credits including his 2002-04 talk show and guest shots on "30 Rock," "Girlfriends" and other series. The Grammy-nominated singer is working on two new CDs, including one he calls a "big band-soul record."

The ultimate goal, he said, is an epitaph in the very distant future that reads, "This guy did just about everything you could do in the entertainment business and was good at it all" - similar to what's inscribed at Davis' grave in Forest Lawn cemetery in Glendale: "The Entertainer: He Did It All."

Brady, 37, demonstrated his quick wit on Drew Carey's "Whose Line Is It Anyway?" and a knack for running a quiz show on "Don't Forget the Lyrics!" And he said he doesn't feel the need to separate himself on "Deal" from Hall and his reign.

"By virtue of me being myself, it's already different. It's the host in the middle of an audience and there's no script, so it's just me," he said. "You can't be Monty Hall; he had his own very dry thing and a great bearing about him that made you trust him."

"All I can do is make the contestants feel good and be affable and have a good time," said Brady, noting parallels between hosting and doing improv. "That's what this show's about. It's about contestants and the game. It's not about a host trying to hog the spotlight."

Although he's found that some players are less willing to risk losing prize money in the current economy, he's equally surprised by how many gamble on the tantalizing possibility of a valuable prize versus the risk of a "zonk," something silly and worthless.

"I always thought that common sense would prevail. But on a game show, there is no common sense," Brady said.
By Lynn Elber