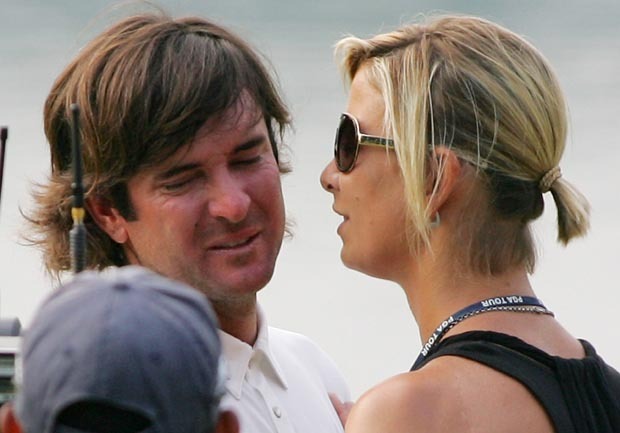 She couldn't be there for the biggest win of his career, but she had a good reason: Two weeks ago the couple adopted a 1-month-old boy they named Caleb, a process that took more than two years.

Watson's wife, who once played pro basketball in Europe, said they considered flying up on Sunday for the final round. Watson said the adoption is not final and the baby cannot leave Florida yet. The couple, whose regular residence is in Scottsdale, Ariz., have leased a house in Orlando at Isleworth.

If the back nine at the Masters was a blur, so were the last two weeks. They have gone through the disappointment of thinking they were going to adopt, only for something to fall through.

The adoption of Caleb came together quickly, and they took the baby home Monday after Bay Hill.

"I almost pulled out of Bay Hill, but I didn't," Watson said. "I finished fourth, and then Monday morning, we were down in south Florida picking up little Caleb. I can't wait to get back."

His wife watched on TV, and said it was as nervous as she has ever been watching golf.

"I was trying to feed Caleb, put him down for a nap," she told Golf Channel. "I feel like everything just went so fast."

When Phil Mickelson won the Masters in 2010, he was photographed in his green jacket in the drive-thru lane at Krispy Kreme. Now it's Watson's turn.

"You know he's going to put on that green jacket and drive down something in General Lee," his wife said.

The next big question: What will he serve at the Champions Dinner next year at Augusta?

"No idea," his wife said. "He's really, really plain. His favorite meal is teriyaki chicken and rice. That would be boring."

"Watson plays by the seat of his britches and has now proven that you can bag the biggest trophies in the world by taking the minimalist route," Elling writes. "Watson, who has never had a formal lesson, does not use a swing coach or a mental-game guru, is perhaps the most jaw-dropping shot-maker on the PGA Tour, and this time, as he toured the most famous track in the world, he needed almost all the side sauce he could put on the ball."

Aaron Rodgers lashes out at NFL over refs