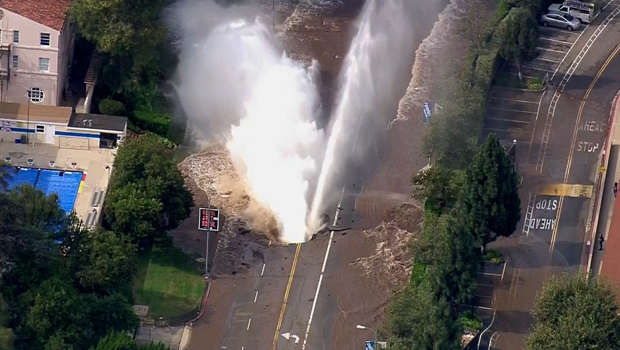 LOS ANGELES - A broken water main near the UCLA campus spewed water some 30 feet in the air Tuesday, stranding cars and people in underground parking structures and covering parts of campus in ankle-deep water, including the athletic field and the outside of Pauley Pavilion, the school's famed basketball arena.

The geyser of water began shooting from the 30-inch water main on Sunset Boulevard next to campus at about 3:30 p.m. and was still flowing more than an hour later, opening a hole about 10 feet wide in the street.

Fire crews have helped at least three stranded drivers get out of parking garages, which were taking the brunt of the damage, Los Angeles Fire Department spokesman Brian Humphrey said.

People saw the water and started rushing down the stairwells to rescue their cars, and authorities had to keep them out as water rose up to the wheel wells of vehicles, many of which were stranded, Humphrey said.

Firefighters have been searching cars in the structures to make sure they haven't lost anybody who was inside, Humphrey said. No injuries have been reported.

No campus buildings have been flooded yet, but water is running up to the door of Pauley Pavilion, the arena that recently underwent a major renovation.

Students wearing shorts and backpacks could be seen wading across campus through ankle-deep water, and some had pulled out body boards near a stairwell where water was streaming.

"The Number 1 thing is to keep hundreds of students from wandering into the water where they could get swept off their feet," Humphrey said.

The Los Angeles Department of Water and Power said in a statement that several crews are on the scene shutting down valves and being careful not to cause more breaks.

There's no word on what caused the break.

More than 100 firefighters were on the scene, including a swift-water rescue team that brought inflatable boats in case they are needed.