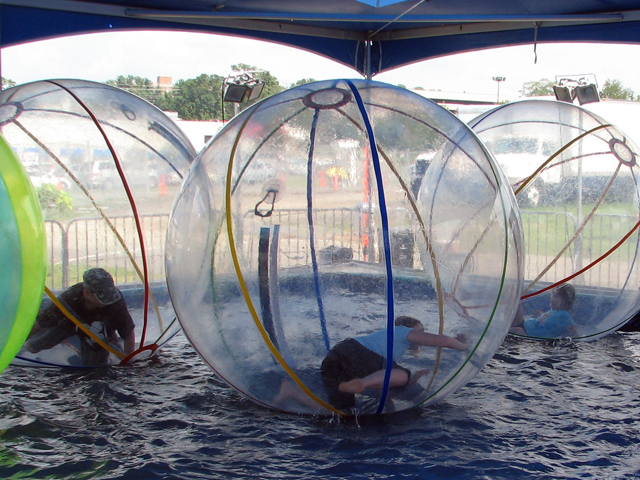 Walking on water isn't only the stuff of Bible texts these days. It's being done all around the world and here in the U.S., thanks to a special bubble. But the federal government is now warning consumers this latest fad could be fatal.

Introduced three years ago, manufacturers say there are now more than 1,000 water balls in the United States. From water parks to backyard pools, "water walking balls" are the latest amusement craze to sweep the nation.

After you climb in the transparent bubble, it's filled with air and you get zipped inside and then you can literally walk on water.

It looks fun, but is it safe?

At a mall near Boston, a girl stopped breathing and became "unresponsive" while playing inside a water ball last November.

Jamie Gavin, a witness, said, "She was completely blue and completely limp. She needed several minutes of CPR. I thought she was dead when they pulled her out."

The girl survived, but now, the CPSC has issued a consumer alert, warning that water walking balls could be a "deadly danger."

CPSC Chairman Inez Tenenbaum told CBS News, "This has the danger of suffocation, drowning or becoming seriously injured inside the ball."

Critics say oxygen can be depleted and carbon dioxide can rise to dangerous levels in just a few minutes. Another concern, Koeppen pointed out, is a person in trouble can't get out on his or her own.

"The consumer gets inside of the water walking ball and the ball is zipped from the outside; the consumer cannot open the ball," Tenenbaum said.

But manufacturers say there is absolutely no danger when water balls are used properly.

Bruce Spitzer, owner of Eurobungy, an amusement ride company, said, "I believe our product is safe."

Eurobungy, which has sold more than 200 balls in the U.S., says it's never experienced a single serious injury.

Still, the CPSC says the balls are just too dangerous and consumers should stay away.

"Right now we are warning all consumers not to use these balls, and this is a very strong warning," Tenenbaum said. "We're also doing further investigation and we will take whatever steps necessary to keep consumers safe.

The makers of water balls say they have plenty of air inside, up to an hour's worth, based on the size of the person using it. But the CPSC says it knows of no safe way to use this product.