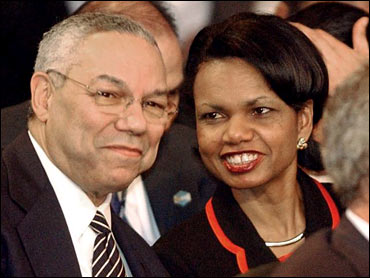 The State Department inspector general has discovered that former Secretary of State Colin Powell and aides to his successor Condoleezza Rice had confidential and secret information in their personal emails, CBS News confirmed Thursday.

A source familiar with the investigation, which is preliminary and still under review, said about a dozen emails that were sent or received over the course of six years during George W. Bush's administration are now considered confidential or secret. There was nothing found that was top secret.

In a statement obtained by CBS News, Powell said Thursday that the emails at issue were sent to his personal email from his executive assistant and they were unclassified at the time and should be considered unclassified now.

"The truth couldn't be plainer: the private-email problem is not a Hillary Clinton problem. It's a government-wide problem that's existed since the advent of email itself," said Rep. Eliot Engel, D-New York, top Democrat on the House Foreign Affairs Committee.

"The Inspector General raised concerns that additional potentially classified may continue to reside in the Department's unclassified archives associated with Secretaries Powell and Rice and their respective staffs and recommended that the Department review those archives and remove all classified information," Cummings' office said.

In light of this new revelation, Cummings sent a letter to the State Department on Thursday asking for copies of the emails as well as exchanges between the department, inspector general and others.

Cummings questioned how Republicans could only target Democratic presidential candidate Hillary Clinton under the circumstances.

"My concern has been that Republicans are spending millions of taxpayer dollars singling out Secretary Clinton because she is running for President--often leaking inaccurate information--while at the same time disregarding the actions of Republican Secretaries of State," he said. "Based on this new revelation, it is clear that the Republican investigations are nothing more than a transparent political attempt to use taxpayer funds to target the Democratic candidate for President."

The news comes less than a week after the Obama administration confirmed for the first time that Clinton's unsecured home server when she was secretary of state contained 22 "top secret" emails, which the State Department said would not be released.