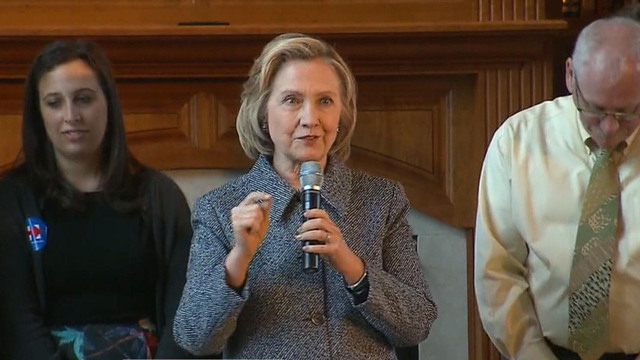 The Obama administration confirmed for the first time Friday that Hillary Clinton's unsecured home server contained some of the U.S. government's most closely guarded secrets, censoring 22 emails with material demanding one of the highest levels of classification. The revelation comes just three days before the Iowa presidential nominating caucuses in which Clinton is a candidate.

The State Department released the latest batch of emails from Clinton's time as secretary of state on Friday evening. But seven email chains are being withheld in full because they contain information deemed to be "top secret." The 37 pages include messages recently described by a key intelligence official as concerning so-called "special access programs" - a highly restricted subset of classified material that could point to confidential sources or clandestine programs like drone strikes or government eavesdropping.

Clinton spokesman Brian Fallon on Friday indicated on Twitter that the campaign wants all of the emails at least partially released:

In a longer statement, Fallon said the process of vetting the emails "has been dominated by bureaucratic infighting" and that the question of classification comes down to an "interagency dispute."

The decision to keep 22 emails secret "flies in the face of the fact that these emails were unmarked at the time they were sent, and have been called 'innocuous' by certain intelligence officials," Fallon continued. "We understand that these emails were likely originated on the State Department's unclassified system before they were ever shared with Secretary Clinton, and they have remained on the department's unclassified system for years. And, in at least one case, the emails appear to involve information from a published news article."

Department officials wouldn't describe the substance of the emails, or say if Clinton sent any herself. However, State Department spokesman John Kirby clarified Friday, "The documents are being upgraded at the request of the Intelligence Community... These documents were not marked classified at the time they were sent."

Kirby told the AP that the decision to withhold documents in full as "not unusual." That means they won't be published online with the rest of the documents, even with blacked-out boxes.

Clinton, the front-runner for the Democratic presidential nomination, has insisted she never sent or received information on her personal email account that was classified at the time. No emails released so far were stamped "CLASSIFIED" or "TOP SECRET," but reviewers previously had designated more than 1,000 messages at lower classification levels for public release. Friday's will be the first at the top secret level.

For those emails that Clinton only read, and didn't write or forward, she still would have been required to report classification slippages that she recognized. But without classification markings, that may have been difficult, especially if the information was in the public domain.

Kirby said the State Department's focus as part of the Freedom of Information Act review of Clinton's emails was on "whether they need to be classified today." Questions about their past classification, he said, "are being, and will be, handled separately by the State Department."

Possible responses for classification infractions include counseling, warnings or other action, State Department officials said, though they declined to say if these applied to Clinton or senior aides who've since left the department. The officials weren't authorized to speak on the matter and spoke on condition of anonymity.

Kirby also noted Friday that emails that Clinton exchanged with President Obama will not be released. Specifically, 18 emails comprised of eight distinct email chains between Clinton and the president are being withheld in full from the State Department's Friday email release.

"Secretary Clinton and the president did on occasion exchange emails," Kirby said. "Such presidential records shall remain confidential to protect the president's ability to receive unvarnished advice and counsel but will ultimately be released in accordance with the Presidential Records Act."

Friday's release comes at an awkward time for Clinton. The Iowa caucus is on Feb. 1, and her main challenger, Vermont Sen. Bernie Sanders, is running neck and neck with her in the polls there and leads solidly in New Hampshire. Clinton still holds a strong advantage in national polls.

Sanders released a statement suggesting the emails shouldn't be an issue in the election.

"As I said at the first Democratic debate, there is a legal process in place which should proceed and not be politicized," he said. "The voters of Iowa and this nation deserve a serious discussion of the issues facing them."

Republicans, however, did not hesitate to politicize the issue.

The emails have been an issue for Clinton's campaign since it became known 10 months ago that she exclusively used a nongovernment account linked to a homebrew server while in office. Clinton first called the decision a matter of convenience and then termed it a mistake, even if doing so wasn't expressly forbidden. But the matter could prove more troublesome now that Clinton's former agency has confirmed that business conducted over the account included top-secret matters.

Like Clinton, the State Department discounted such a possibility last March. Both also said her account was never hacked or compromised, which security experts assess as unlikely, and that the vast majority of her emails were preserved properly for archiving purposes because she corresponded mainly with government accounts. They've backtracked from the archiving claim, while the AP discovered several phishing attempts on her server connected to Russia.

The question of special access programs first surfaced last week, when Charles I. McCullough, the inspector general for U.S. intelligence agencies, cited examples on Clinton's account in a letter to Congress. Republicans pounced on the report, though Clinton's campaign insisted none of the exchanges were "classified at the time" and accused McCullough and GOP lawmakers of selectively leaking materials to damage her presidential hopes.

The AP reported last August that one focused on a forwarded news article about the classified U.S. drone program run by the CIA. Such operations are widely covered and discussed in the public sphere, including by top U.S. officials, and the State Department immediately pushed back against McCullough's claim. The other concerned North Korean nuclear weapons programs, according to officials.

At the time, several officials from different agencies suggested the disagreement over the drone emails reflected the government's tendency to over-classify material, and the lack of consistent policies across difference agencies about what should and shouldn't be classified.

The FBI also is looking into Clinton's email setup, but has said nothing about the nature of its probe. Independent experts say it is highly unlikely that Clinton will be charged with wrongdoing, based on the limited details that have surfaced up to now and the lack of indications that she intended to break any laws.

"What I would hope comes out of all of this is a bit of humility" and an acknowledgement from Clinton that "I made some serious mistakes," said Bradley Moss, a Washington lawyer who regularly handles security clearance matters.

Legal questions aside, it's the potential political costs that are probably of more immediate concern for Clinton. She has struggled in surveys measuring her perceived trustworthiness and an active federal investigation, especially one buoyed by evidence that top secret material coursed through her account, could negate one of her main selling points for becoming commander in chief: Her national security resume.