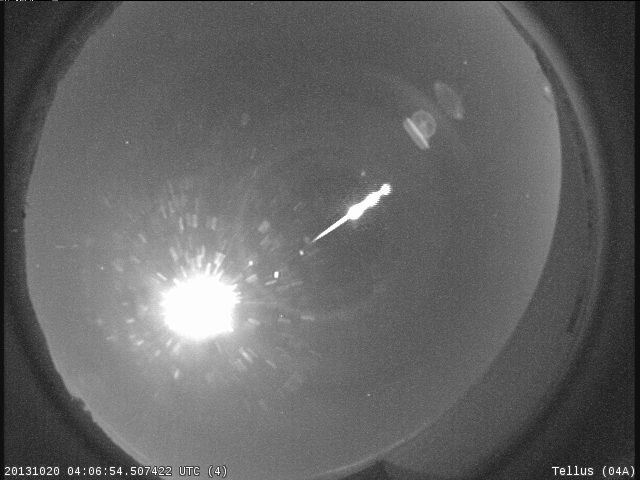 The typically tepid Taurid meteor shower is coming on strong this week and next. Watch out for fireballs.

"There are not many of them. You'll see maybe only a few throughout the night. But when they do come, they're really spectacular," Bill Cooke, lead for the NASA Meteoroid Environments Office, told CBS News.

The annual Taurids -- named for the constellation Taurus, the bull, from which they appear to radiate -- are a particularly large collection of particularly large meteoroids. The "confusing meteor shower," as Cooke described it, stretches across several weeks, from September through November. It is divided into two parts and peaks are hard to distinguish. The first peak of activity, known as the South Taurids, because they radiate from the southern part of Taurus, ended Oct. 30. The first of the North Taurids was spotted on Halloween. They are expected to peak Nov. 12.

The best years to catch the show is when there is a "Taurid swarm," which happens every 5 or 6 years. Cooke said experts believe this is a swarm year, when many pebble-sized fragments of the comet Encke will burn up as they hit the Earth's atmosphere at 65,000 mph, creating astonishing fireballs.

In meteorite terms, pebble-sized is pretty big; most meteors are smaller than a bead. Their heft gives the Taurids their fantastic glow.

In past years, brightly glowing Taurids have stopped witnesses in their tracks and have been confused for fireworks and airplanes. There were six sightings reported in the U.S. Wednesday night, Cooke said, and a large fireball spotted over Poland last week.

The best time to see the Taurids is when the radiant is highest, around 1:30 a.m. local time. Cooke recommends setting up to watch them between midnight and 3 a.m.

He and his colleagues will be keeping a close eye on the shower in the hopes that a meteorite will survive its fiery entrance to the atmosphere. Because of the size and strength of the Taurids, they are one of only two meteor showers with the possibility of dropping meteorites to the ground. The other is the Geminids in December.

"Comet Encke appears to kick out bigger particles, so it is possible that a big Taurid meteorite can make it to the ground," said Cooke. "We never have recovered one, but if we do we could have piece of Comet Encke that's made its way to Earth."