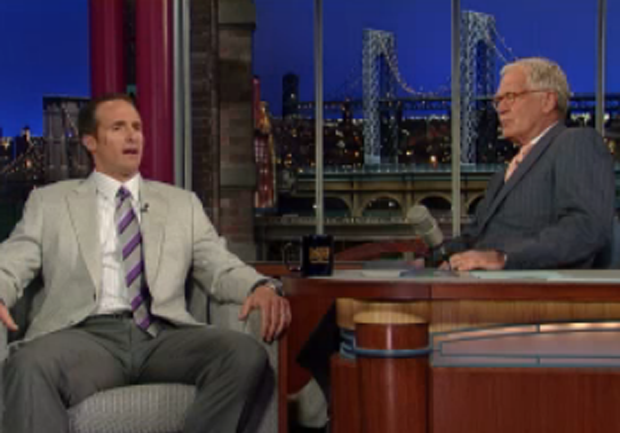 Appearing on CBS' "Late Show With David Letterman" on Thursday night, Brees said the NFL's investigation into the Saints' alleged pay-for-injury scheme has been "extremely unfair" because of a lack of hard evidence.

"Put forth the facts, the truth, and if indeed there was a pay-to-injure scheme, then people will get punished, and if there's not, then let's exonerate these men because, at this point, it seems like it's a smear campaign," Brees said. "We're dragging them through the mud; we're ruining their reputations and careers with no true evidence."

The NFL has produced emails, ledgers, notes and witness statements linking Saints coaches and players to a bounty system in which cash was doled out for "cart-offs" and "knockouts" of opposing players.

NFL spokesman Greg Aiello said in an email to The Associated Press that "the evidence is overwhelming."

"I think I can speak for all fans in America for that matter, we are tired of hearing about it," he said. "We don't want to talk about it anymore."

Sensing Brees' exasperation, Letterman cracked that he could get the star QB a deal with the New York Jets.

Brees' response: "They have enough quarterbacks."

Earlier this week, former Saints linebacker Scott Fujita, who was one of four players suspended by the league, echoed Brees' comments on the bounty investigation.

"I'm not saying the NFL is intentionally lying," Fujita told the AP. "I've been willing to give them the benefit of the doubt that they may have just been working with the information they've been given, even though much of that information was inaccurate and lacked credibility. It's their cavalier interpretation of everything that's been way off. They clearly proceeded with a public smear campaign with very little regard for the truth."