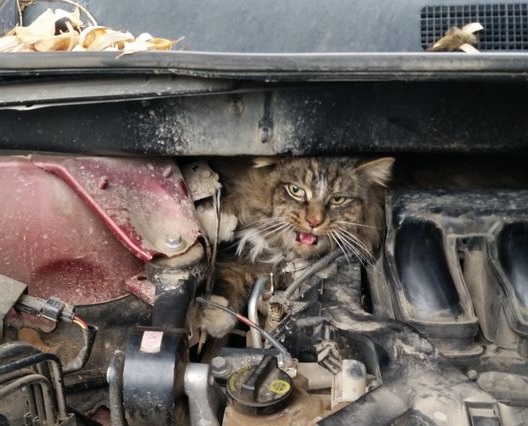 SPOKANE, Wash. -- A cat in Washington state may have just used one of its nine lives.

Sarah Ann Stevens was driving from Chewelah to Spokane, Washington, when she made a pit-stop at a Costco, reports CBS affiliate KREM. It was when she returned from the store she made a surprising discovery -- there was a cat lodged behind her car engine.

Stevens heard a loud thump and a meow coming from the hood of her car. Once she opened the hood, she saw what was making the noise -- a cat.

As KREM reports, it wasn't just any cat. Stevens recognized the cat as Thomas -- a name she gave a cat two years ago when he randomly showed up at her home.

One of the men pulled the cat out from behind while Stevens pushed from the front.

KREM reports that everyone was scared Thomas might try to run away once he was removed from the hood of the car, but he did the opposite. Thomas curled right up into Stevens' arms.

Thomas appeared unharmed, except for what looks like a small burn or scratch on his nose, Stevens told KREM.

Thomas is still in need of a good home -- Stevens believes a place in the country-side would be best.