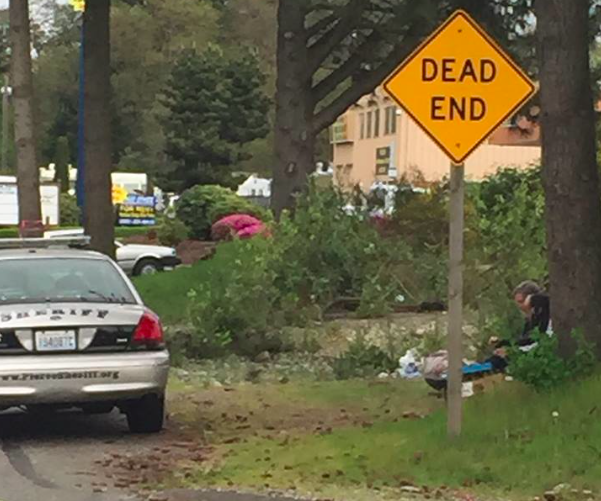 A Washington state man and his fiancee were sitting in traffic next to a police car when they both noticed something out of the ordinary.

The couple spotted an on-duty sheriff's deputy sitting on a patch of grass along the side of the road, sharing his lunch with a homeless man.

Tacoma resident Darren Ballard Sr. had to do a double-take.

"I just couldn't believe my eyes," Ballard told CBS News after seeing the deputy split a sandwich with the man.

Ballard was so touched by the kind act that he snapped a picture and posted it on his Facebook page to give police officers their "props."

"Just saw this cop having a sandwich with a homeless guy in the cut wanting no attention just doing a good deed," Ballard posted. "There are good police officers out there people this made my day please share!!!!!"

The photo, uploaded to Facebook on Tuesday, has since gone viral -- shared by more than 31,000 people, including the local sheriff's department where the deputy works.

The deputy, who wishes to remain "anonymous," found the homeless man panhandling and struck up a conversation with him, he explained on the department's Facebook page. "Our deputy asked him if he was hungry the man said he was. So the deputy sat down with him and shared his lunch with the man."

It's as simple as that.

According to Troyer, these type of incidents happen "quite often" in the department.

Hundreds of people commented on the photo, thanking Ballard for capturing the "heartwarming" moment.

"I think this is fabulous. Cops are humans too -- just like this fellow that happens to be homeless," one Facebook user wrote.

"Most are good people. It's nice to see this side of them," another wrote.

Ballard agreed and thanked people for spreading the story.

"It's nice for the police, who do handle their job with the utmost passion and respect in the field, get a break with some good positive news for a change," he said.