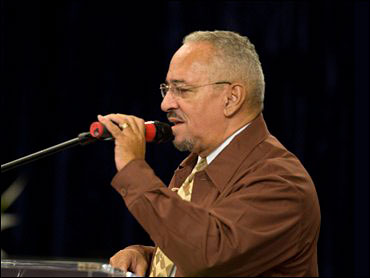 Churches in the nation's capital have started extending invitations to President-elect Barack Obama and his family, touting their African-American roots, their ties to presidents past and to Mr. Obama himself.

The choices are abundant. Numerous, thriving congregations are an easy walk from 1600 Pennsylvania Ave. Just across Lafayette Square from the White House is St. John's Church, an Episcopal parish known as the "Church of the Presidents," where presidents as far back as James Madison have worshipped. St. John's has a standing invitation: Pew 54 is the President's Pew, reserved for the nation's leader.

Or he could choose, as many presidents have done, not to attend services at all. President Bush, for instance, has only infrequently attended services in Washington, occasionally going to St. John's.

Whatever choice the Obamas make, it is sure to be analyzed through the prism of Mr. Obama's relationship with the Rev. Jeremiah Wright, who was Mr. Obama's pastor for 20 years at Trinity United Church of Christ in Chicago.

Mr. Obama resigned from Trinity during the presidential campaign after inflammatory comments by Wright from the pulpit became a campaign issue.

Nick Shapiro, a spokesman for Mr. Obama's transition, declined to discuss which church the Obamas might attend.

Mr. Obama has spoken frequently about the importance of his Christian faith. In his 2006 book, "The Audacity of Hope," he wrote that "the historically black church offered me a second insight: that faith doesn't mean that you don't have doubts, or that you relinquish your hold on this world. ... You needed to come to church precisely because you were of this world, not apart from it."

Despite those words, Mr. Obama has attended church sparingly in the past several months. Since winning the election, he has spent Sunday mornings at the gym. Many Washington-area churches hope that will change after he is inaugurated.

At Metropolitan AME Church, a historic, predominantly black congregation six blocks from the White House, senior pastor Ronald Braxton says parishioners have been buzzing about the possibility that the incoming president, his wife, Michelle, and their daughters, - 10-year-old Malia and 7-year-old Sasha - might attend services with them.

Braxton said it would be good if Mr. Obama resumed worshipping at a congregation rooted in the black community.

"He's familiar with African-American worship traditions," Braxton said, referring to Mr. Obama's membership at Wright's church in Chicago. "Metropolitan AME would be a wise a choice and a safe haven in which to worship."

Metropolitan AME has about 2,000 members, including former Clinton administration insider Vernon Jordan and former Transportation Secretary Rodney Slater, Braxton said. The church has a long history as well - Frederick Douglass worshipped and was eulogized there. Bill Clinton attended inaugural prayer services there in 1993 and 1997.

Braxton said the AME denominational leadership is interested in where the Obamas will worship, and is developing plans to extend a formal invitation.

Church member Michael Horton said the congregation could provide the Obamas a base of moral support.

"Our current congregation is full of 'agents-for-change,"' he said, playing on one of Obama's campaign themes. "I believe there is no better place for the Obamas to worship and feel comfortable."

The Clintons regularly attended Foundry United Methodist Church, about a mile from the White House, during their White House years, but never formally became members.

Snyder, whose congregation has staked out a strong position supporting gay rights and gay marriage, said the congregation has outreach plans to all new arrivals associated with the change in administration, including efforts to get the word out to the First Family "that Foundry is a welcoming church."

The United Church of Christ, the denomination from which Obama resigned when he left Wright's church, issued a written invitation to join a UCC denomination in Washington and resume his connections to the church.

The UCC is mostly white, a descendant of New England Puritanism. But the denomination is diverse racially and culturally, stemming in part from the church's extensive involvement in the abolitionist movement.

"It would be an honor for the Obamas to attend a UCC church," said Nathan Harris, pastor at Lincoln Congregational Temple, a small UCC congregation in Washington. "Hopefully he and his family will pray and find a place that works for them."

Randall Balmer, a professor of American religious history at Columbia University who wrote "God in the White House: How Faith Shaped the Presidency from John F. Kennedy to George W. Bush," said there is no obvious choice for Obama as he searches for a congregation.

And while he said Americans generally like to know that their president goes to church on Sunday, they tend not to be concerned about the particular denomination. He hopes that same deference will be extended to the Obamas' choice.

"I'm sure he's going to be careful. He got burned," Balmer said, referring to the Wright controversy. "He probably will be a little bit cautious with whom he associates."

Pastors at D.C. congregations said they understand that their own words would be scrutinized more closely if the First Family were sitting in the pews, but universally said they wouldn't change what they preach.

"I hope that I am deliberate and thoughtful about what I say every Sunday," Snyder said.