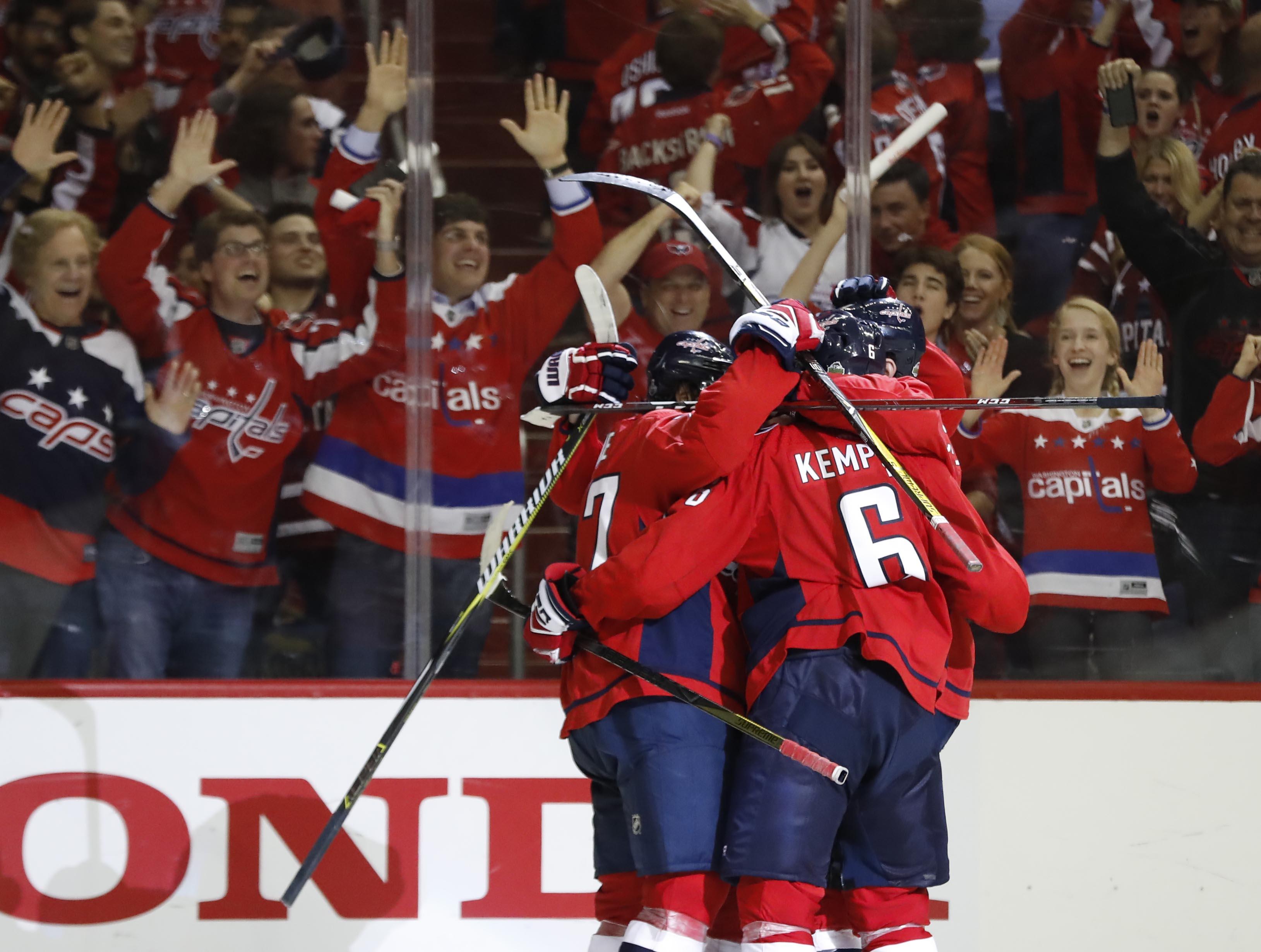 Believe it or not, we now live in a world where the Washington Capitals are just one win away from a Stanley Cup. After dropping the opening game of the Stanley Cup Final, the Capitals continued their surge against the Vegas Golden Knights on Monday night, taking home a 6-2 win in D.C. As a result, the Capitals will take a 3-1 series lead back to Vegas with a chance to raise Lord Stanley for the first time in franchise history.

Here's what you need to know from Monday's Game 4.

James Neal didn't have the greatest start to his night in Washington. It started off with him missing a wide-open net and hitting iron in a baffling sequence that proved to be costly for Vegas.

Like, it couldn't have been much more wide open and he just…missed it.

It's probable that Neal was aiming far side to avoid the falling Matt Niskanen beside the Capitals' net, but…woof.

He eventually got on the board with the Knights' first goal of the night.

But that first chance was a major blown opportunity for Vegas, especially because it cost them an opportunity to seize early momentum and get a little confidence back after two straight losses.

The Capitals exploded in the first period

After Vegas narrowly missed claiming an early lead on that Neal opportunity, it was the Capitals who responded in tremendous fashion, exploding for three goals in a 10-minute span to close out the opening frame.

The scoring chances were 11-4 in Vegas' favor in that first period, but the Capitals took advantage of nearly all their opportunities to head into intermission with a 3-0 lead. They got some lucky bounces and deflections in the process, but Washington's players did a great job of corralling those fortunate bounces and turning them into results.

They say it's sometimes better to be lucky than good, and that might apply here. The Caps got a ton of good fortune, and the Knights got none. But they also say that you make your own luck ... so go ahead and pick your own narrative, I guess?

Special teams were a killer

Whenever you lose the possession game and get out-chanced, it's important to win the special teams battle. Washington certainly did that on Monday night. The Caps converted three times, including two on their first two power-play opportunities. T.J. Oshie got the first, and John Carlson got the second.

The Golden Knights had some good chances, but Washington did a great job of holding onto momentum and limiting the damage, even when they were outmanned.

Holtby was the better goalie...again

The Golden Knights had the edge in shots (30-23) and scoring chances (31-21) in this game but Braden Holtby was a major factor in Vegas ending up on the wrong side of the scoreboard.

He was especially great through the first 40 minutes and left the Knights completely frustrated when the output numbers suggested that they probably should've been winning.

Just look at this shot chart that lays out where each team's chances came from at 5-on-5 through the first two periods.

If you're not a chart master, here's what that graphic tells you: Vegas had the majority of the chances through 40, and a whole lot of their chances came in high-danger areas directly in front of the net. Still, they were completely blanked, largely because Holtby was extremely solid between the pipes.

Meanwhile, the Caps were held without a lot of high-danger chances, but they made the most of what they got. Marc-Andre Fleury still hasn't been the monster he was through the first three rounds. He stopped just 17 of 23 (.739) on Monday, bringing his save percentage down to .845 in this series. He had a .947 postseason mark heading into the series.

Oshie was a standout for Washington

T.J. Oshie had three points (a goal and two assists) for Washington and he was a dominant physical presence in this game. His willingness to throw the body in the offensive zone played a key role in both of the goals in which he had assists on.

On the first, he took out Cody Eakin, which left plenty of space for John Carlson to rip home a power play goal from the left circle.

On the second, Oshie dropped a pass to Nicklas Backstrom and then threw a reverse hit into Colin Miller, taking the Golden Knights defenseman out of the play and freeing up a passing lane to Michal Kempny for an important goal that answered a Vegas tally in the third period. Vegas revealed after the game that Miller broke his nose on the play.

It appears the Golden Knights didn't particularly care for that play by Oshie, as they went after him in the closing minutes of the game. Ryan Reaves and Brayden McNabb both tried to get a piece of Oshie, and McNabb ended up delivering a bad hit that could have ended way worse than it did. Luckily, Oshie appeared to be OK.

After that nastiness, Oshie, Reaves and Deryk Engelland were all handed misconducts for extracurricular activities. The Capitals ended up with a 5-on-3 power play, and they scored to seal the victory. Not the finish the Golden Knights were hoping for, and now they're officially fighting for their playoff lives.

This story was originally posted to CBSSports.com.