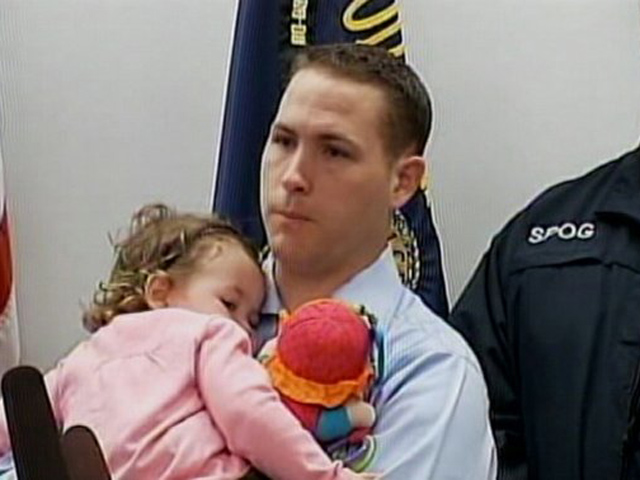 (CBS/AP) SEATTLE - A Lakewood, Wash. police officer allegedly embezzled over $120,000 from a fund for the families of four colleagues shot to death in the line of duty.  He then spent the money on trips to Las Vegas among other things, the U.S. attorney's office said Wednesday.

Officer Skeeter Timothy Manos is also accused of making purchases of several thousand dollars at Costco and Home Depot with the money.

Manos, 34, was arrested Wednesday without incident at Lakewood City Hall. He made his initial court appearance in federal court in Tacoma later in the day.

The documents indicate that Manos began scheming to divert the money and opened a hidden bank account on Jan. 19, 2010 which was  just seven weeks after the Nov. 29, 2009 shooting.

The public contributed more than $3.2 million to the families of the four Lakewood officers who were shot to death by convict Maurice Clemmons at a coffee shop while they were beginning their shifts. Clemmons fled the scene, sparking a statewide manhunt that ended when a Seattle police officer shot and killed him two days later.

The criminal complaint alleges Manos bought plane tickets for himself and others for a trip to Las Vegas. This is  where he withdrew more than $500 at the Bellagio casino in April 2010.

Manos spent the money over the course of a year, shopping at outdoor store REI, buying snowboard goggles and boots among many other items, records state. He also made several trips to Home Depot and Costco, spending almost $6,000 in one day alone at the home improvement store, authorities say.

Manos' alleged spending spree finally ended after his fellow officers began to grow suspicious about how donations had been handled.

Earlier this year, officer Jeremy Vahle sought answers from the union that represents officers then went to Bank of America and asked for all accounts associated with the guild. He eventually discovered the hidden account, documents state.