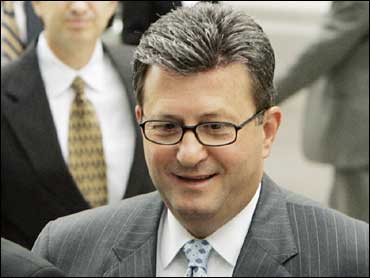 Details of the government's request were redacted in the documents released Wednesday. But last year, Nacchio's attorney Herbert Stern said the government asked for access to Qwest customers' phone records in 2001, with neither a warrant nor approval from a special court established to handle surveillance matters.

In July 2001, the National Security Agency named other companies as recipients of a contract that Nacchio believed Qwest would get, the court documents said.

Nacchio was convicted last spring on 19 counts of insider trading. He was accused of selling $52 million in stock in 2001 based on nonpublic information that Qwest Communications International Inc. was having trouble meeting its financial targets.

Nacchio's lawyers contended he had classified information that led him to believe Qwest would win lucrative government contracts that would have bolstered Qwest's revenue. However, that argument was not mentioned at trial.

Court documents released Wednesday show Nacchio's lawyers had wanted to present those arguments, but alongside his refusal of the government request.

According to The Rocky Mountain News, Nacchio planned to demonstrate at trial that he had a meeting on Feb. 27, 2001, at the National Security Agency's headquarters at Fort Meade, Md., to discuss a $100 million project. According to the documents, another topic also was discussed at that meeting, one with which Nacchio refused to comply.

The topic itself is redacted each time it appears in the hundreds of pages of documents, but there is mention of Nacchio believing the request was both inappropriate and illegal, and repeatedly refusing to go along with it.

U.S. District Judge Edward Nottingham would not allow Nacchio to present an argument on retaliation.

Nacchio's lawyers argued in the court documents that Nacchio couldn't fully explain what happened with the government contracts without presenting the retaliation argument.

Nacchio is free pending his appeal.