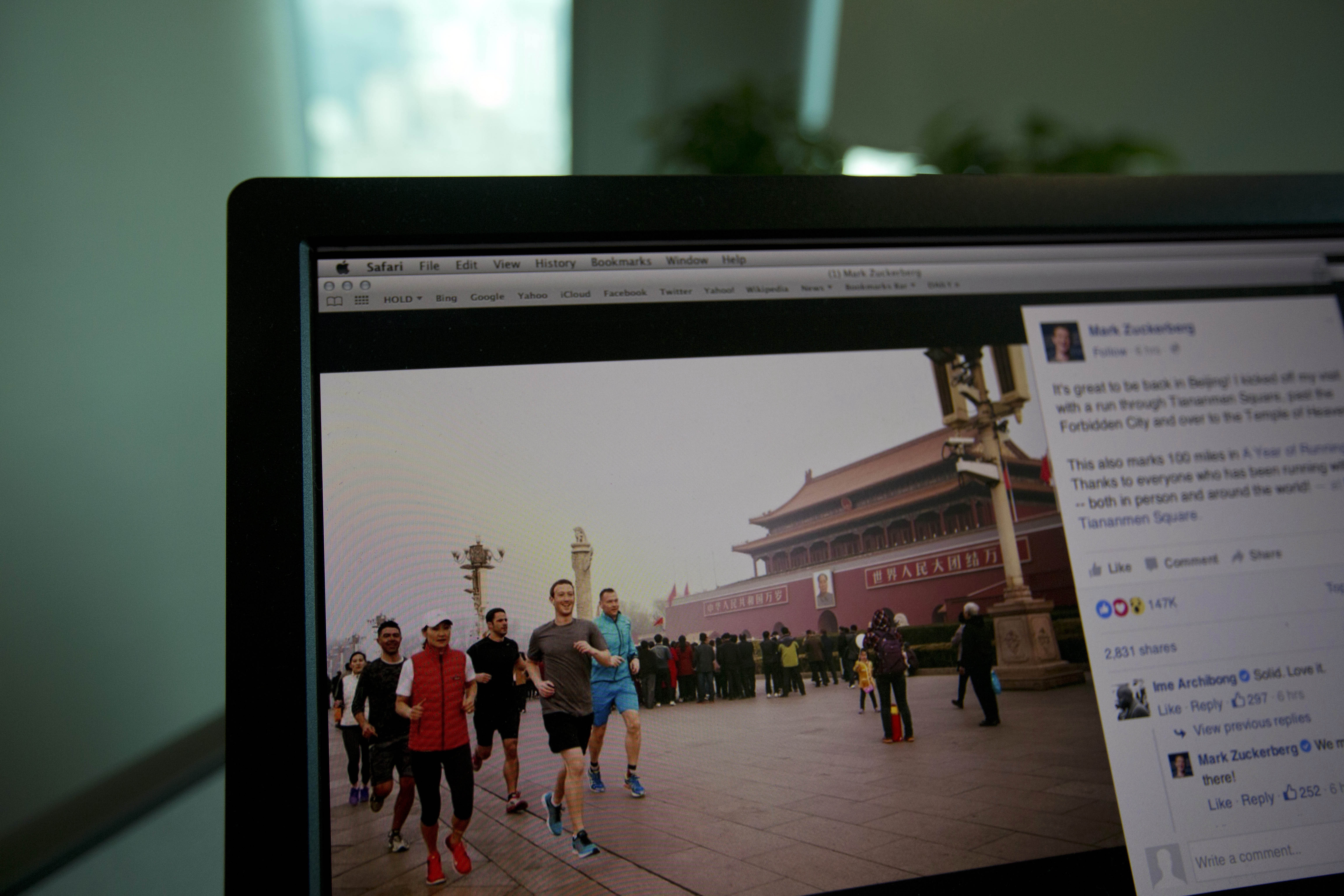 Zuckerberg is a favorite personality among the Chinese public, despite Facebook being banned in the country alongside other overseas social media platforms. He's also become somewhat notorious for persistent yet so far futile efforts to woo leaders enforcing China's strict online censorship.

The young tech tycoon is in Beijing to attend an economic forum over the weekend, when some of the world's business and finances leaders will rub shoulders with senior Chinese politicians.

Zuckerberg posted the photo to his Facebook page of him and five others running through Tiananmen Square with the famous gate to the Forbidden City imperial palace in the background. None wore the air-filtering face masks that are ubiquitous in Beijing and other Chinese cities.

At the time the photo was taken, Beijing's air pollution index was well into the hazardous zone at about 15 times of the level considered safe by the World Health Organization. Health experts urge people to avoid any outdoor activities on such heavily polluted days.

Chinese residents wondered aloud whether Zuckerberg's jog was yet another gesture aimed at pleasing the Chinese authorities who claim they are gradually winning the battle against air pollution.

Previous efforts include Zuckerberg's telling China's top Internet official on a visit to Facebook's California headquarters in 2014 that he was engrossed in Chinese President Xi Jinping's collected speeches. The same year he famously engaged his audience in halting Chinese at a forum at prestigious Tsinghua University while avoiding mention of the government ban on Facebook.

"The human-flesh smog vacuum is better when it's American-made," teased Peng, playing on a joke among Beijing residents that they filter the city's air with their lungs by inhaling harmful particles.

Others noted that Zuckerberg's run took him through the square where hundreds of thousands of Chinese students gathered in the spring of 1989 to demand democracy. The movement ended in the early hours of June 4 after troops and tanks crushed all resistance, killing hundreds, possibly thousands of protesters.

Nestle misled about GMOs in its food products: lawsuit

Why cow dung patties are selling like hot cakes in India

Starbucks accused of "war on Christmas" with holiday cups

Sick pet? Here's the cost of treating cats and dogs