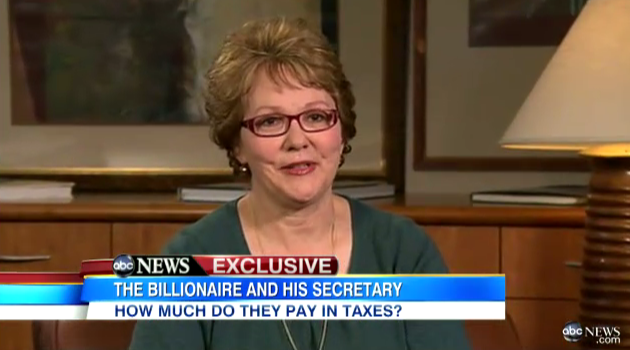 Following a cameo in President Obama's State of the Union speech Tuesday, Debbie Bosanek and her boss, Warren Buffett, continued their push to overhaul the nation's tax code in an interview with ABC News.

Bosanek, billionaire investor Buffett's longtime secretary, has taken on a somewhat symbolic role in her boss's plight to even out a tax code he believes is unjust. In an op-ed last year, Buffett argued his secretary shouldn't be paying a higher tax rate than he, just because much of his income is in capital gains and investments.

"I believe this should be a defining issue," Buffett told ABC, of changing the nation's tax code. "Debbie works just as hard as I do and she pays twice the rate I pay. I think that's outrageous. "

According to Buffett, his "entire office" pays a higher tax rate - "between 33 and 41 percent in payroll and income taxes" -- than he does.

Bosanek, who said her rate was "average" relative to those in her office, said she hadn't necessary expected to be singled out in this way.

"Everybody in our office is paying a higher tax rate than Warren, so it just didn't dawn on me that I would be singled out," she said. Still, she said she "didn't think it was right" that her boss was paying a smaller fraction of his income in taxes than were his employees.

The issue has come under the microscope in recent days in light of Mitt Romney's having released his tax returns, showing that hepaid less than a 15 rate on more than $40 million in acquired wealth over the past two years.

"I don't blame Governor Romney for paying the tax rate he paid," Buffett said. "I blame the U.S. Congress."

He added: "We've got K-Street, we've got lobbyists, we've got money on our side in terms of lobbyists. Deb does not have a lobbyist. She doesn't have anybody remotely that's representing her. But, believe me, plenty of rich families have lobbyists that are working like crazy to get rid of estate taxes, lower capital gain taxes, whatever it may be. So, if there has been a war going on, the war has been waged by the people who are very well to do who are trying to shift the burden onto people like that and away from themselves."