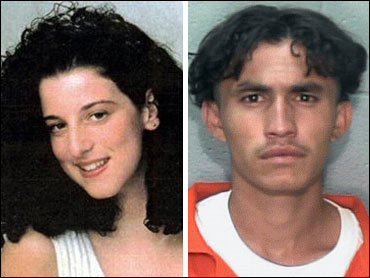 An arrest warrant was issued Tuesday for an imprisoned Salvadoran immigrant in the killing of federal intern Chandra Levy, nearly eight years after the case captivated the country and ended the career of a congressman.

The warrant accuses Ingmar Guandique of killing Levy on May 1, 2001, as she jogged through Rock Creek Park in Washington, D.C. Guandique, 27, is already serving time in a federal prison in Adelanto, Calif., for attacking two women in the same park in the weeks following Levy's disappearance.

"We take solace in the fact that the search for the person responsible has ended and our daughter can finally truly rest in peace," Levy's parents, Bob and Susan Levy, said in a statement given to The Associated Press. "Thankfully the individual responsible for this most heinous and terrible crime will finally be held accountable for his actions and hopefully unable to hurt anyone else ever again."

The break was a long-awaited development in an investigation that had gone cold for years after destroying the career of former U.S. Rep. Gary Condit of California. Authorities questioned Condit, her congressman, in the disappearance, but he was never a suspect in her death. Condit, a popular Democrat for a dozen years in his district, was reportedly having an affair with Levy, and the negative publicity from the case was cited as the main reason for his overwhelming primary loss in 2002.

Levy was 24 and had just completed an internship with the U.S. Bureau of Prisons when she disappeared after leaving her city apartment. The Modesto, Calif., woman was wearing jogging clothes when she vanished, and a man walking his dog found her skull and bones in the park a year later.

The warrant suggests that the killing was a random act of violence, and indicates interviews investigators conducted with 12 witnesses gave them some of the evidence they needed to pursue a case.

Key to breaking the case appeared to be interviews with witnesses who claimed Guandique had bragged to them about killing and raping women, and in two cases, specifically acknowledged killing Levy. And when investigators searched his jail cell, they made another chilling find: a photograph of the young, dark-haired Levy ripped from a magazine.

According to an affidavit supporting the arrest warrant, one of the witnesses said Guandique said that he and two male teenagers were sitting on a bench in a park smoking marijuana and cocaine when he saw Levy jogging. The witness said Guandique thought Levy "looked good" and told the two teenagers that he was going to "get her."

CBS News correspondent Bob Orr reports that, according to the affidavit, in a recorded phone call with one of the witnesses, Guandique spoke of the "girl who's dead."

And in jailhouse conversations with a second witness, Orr reports, Guandique detailed the murder- bragging that he and two other men grabbed a jogger who looked like Levy and "...cut her throat and stabbed her."

The witness told police that Guandique said the three followed her along a path and at one point grabbed her and took her into the bushes. Guandique allegedly told the witness she started screaming and fighting back, at which point he grabbed her by the neck and choked her to death, so that people nearby would not hear the struggle.

Police said her clothing was strewn from the path, down a steep hill toward the bottom of a ravine. Her shoes were unlaced. Her clothing was turned inside out. Her tights were knotted into restraints.

"It appears that Guandique wanted Ms. Levy naked and incapacitated," the document said.

Police won't detail their case before Guandique is brought here face charges - but, officials say they have "forensic" evidence to back up the witnesses, Orr reports.

During the attack, Levy scratched him, the affidavit says. To hide that evidence, the witness said Guandique instructed his family to tell police the scratches came from a fight with his girlfriend if he was ever questioned.

Investigators spoke with Guandique during 2001 and 2002, and at one point administered a polygraph test that was inconclusive. During that time, they also questioned his family and friends, but found no leads relating to Levy.

In a statement, Guandique's attorneys called the latest investigation "flawed."

"This flawed investigation, characterized by the many mistakes and missteps of the Metropolitan Police Department and every federal agency that has attempted to solve this case, will not end with the simple issuance of an arrest warrant against Mr. Guandique," the attorneys, Santha Sonenberg and Maria Hawilo, said. "The public should not draw any conclusions based on speculation by the media and incomplete information. We look forward to trying this case before unbiased jurors who will not rush to judgment."

On Feb. 20, Levy's parents said District of Columbia Police Chief Cathy Lanier had told them an arrest was coming within days. Investigators spent last week interviewing two inmates Guandique spoke to while in prison, according to a person close to the Levy investigation who spoke on condition of anonymity because he was not authorized to speak about the investigation.

"It dawned on me that there's very little I can do or anyone else can do for the Levys other than to offer them justice," Lanier said at a news conference to announce the warrant. "This has been a long time coming."

Authorities said they hoped Guandique would be brought to Washington sometime in the next two months to face a charge of first-degree murder. He was set to be released from prison Oct. 5, 2011. If convicted in Levy's death, he could face between 30 and 60 years more behind bars.

Jean Condit, the former congressman's mother, said her son was glad to hear the arrest warrant was filed, but that she didn't think the development could erase the pain both families had suffered.

"It is good news in a way, but it's still heartbreaking," said Jean Condit, of Ceres, the small San Joaquin Valley town where her son's political career began. "The hurt that has been done to our family will be never be resolved in this world and of course this is nothing that's going to make any difference for her parents, who have grieved so much."