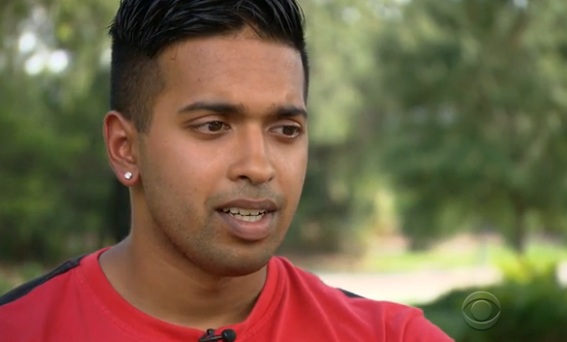 ORLANDO -- When Omar Mateen opened fire with his military style AR-15 assault rifle on a gay nightclub in Orlando, there was one man who recognized the sound, a war veteran.

Imran Yousuf, a bouncer at the Pulse nightclub, never saw the gunman in the early Sunday morning hours. Right after last call, he was making his rounds, and barely missed coming face-to-face with Mateen.

Yousuf, a 24-year-old Hindu, served as a U.S. Marine in Afghanistan. On Saturday night, the combat zone followed him to Orlando.

He ended up saving dozens of lives.

"The initial one was three or four (shots). That was a shock. Three of four shots go off and you could tell it was a high caliber," he said. "Everyone froze. I'm here in the back and I saw people start pouring into the back hallway, and they just sardine pack everyone."

Yousuf knew just beyond that pack of panicked people -- was a door -- and safety. But someone had to unlatch it.

"And I'm screaming 'Open the door! Open the door!' And no one is moving because they are scared," he explained. "There was only one choice. Either we all stay there and we all die, or I could take the chance, and I jumped over to open that latch a we got everyone that we can out of there."

How many people went through the door?

"Probably over 60, 70. As soon as people found that door was open they kept pouring out and after that we just ran," he explained.

He saved a lot of people.

Before the interview, Yousuf told CBS News he hadn't really processed all the lives lost. But, once the combat vet started talking about it, the tears kept coming.