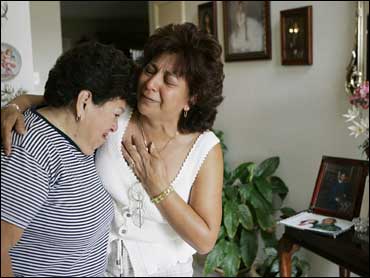 The mother of an Army sergeant who died in a Baghdad vehicle accident weeks after writing a New York Times op-ed critical of the Pentagon's positive assessment of the Iraq war said Wednesday she wants the Army to explain his death.

"I want to know all the details of how he died. I want to know the truth," said Olga Capetillo, whose 28-year-old son, Sgt. Omar Mora, died Monday. "I don't understand how so many people could die in that accident. How could it be so bad?"

Capetillo, who emigrated from Ecuador when Mora was 2, agonized about her son in Iraq. But after Mora co-wrote the sharply critical op-ed, new worries overlapped the old.

Capetillo feared that the article, which ran Aug. 19 in the New York Times, could damage her son's military career or cause him other problems. She said that in the weeks since writing the piece with six other active duty U.S. soldiers, Mora had seemed increasingly depressed and withdrawn.

"I said to him: "Son, I don't want you to have problems because of this. Hopefully, nothing will happen," said Capetillo, speaking in Spanish in the midst of grief so raw and inconsolable it seemed to reverberate around her.

The military did not mention hostile fire and did not specify the neighborhood in western Baghdad.

The controversial Times column, called "The War As We Saw It," expressed doubts about American gains in Iraq. "To believe that Americans, with an occupying force that long ago outlived its reluctant welcome, can win over a recalcitrant local population and win this counterinsurgency is far-fetched," the group wrote.

In the last line, the authors reaffirmed their own commitment: "We need not talk about our morale. As committed soldiers, we will see this mission through."

Another author of the Times piece, Staff Sgt. Jeremy Murphy, an Army Ranger and reconnaissance team leader, was shot in the head while the article was being written. He was expected to survive after being flown to a military hospital in the United States.

Mora and Gray, members of the 82nd Airborne Division, joined the military out of a sense of duty and selflessness, people who knew them said. Both were married and leave behind small daughters.

He enlisted after 9-11, driven by a need to act, said his mother. Within three years, he was a sergeant.

But Mora, a permanent legal resident, longed to join the Special Forces, which requires citizenship. He received his citizenship papers two weeks ago and was waiting to be sworn in when his deployment ended in November.

"My son gave his life for this country. He was proud of this country, even though he was not an American yet," said Capetillo. "I want people to know that we Hispanics love this country, too."

Despite his patriotism, Capetillo said Mora seemed to grow disturbed by the poverty and pain afflicting the country's children. He often asked his family to send cookies and candies for the children, said his mother, a beautician.

In April, Mora came home on a two-week leave. His ears were injured by a roadside bomb and a friend lost his arm. In August, another friend died in Mora's arms.

That death seemed to leave a grim imprint, Capetillo said.

On Friday, an unusually subdued Mora called his mother, and the two spoke for what would be the last time.

"He was so quiet, as if he did not want anyone to hear him," said Capetillo, as family and friends encircled her in her Texas City kitchen. "I told him that I was counting the days until he would come home, that I would give him a big hug."

Mora told his mother that he was very tired.

"Maybe he had a premonition that something was going to happen to him, that he was not going to come back," said Capetillo, as tears moistened her face. "My son escaped death two times before. But this time, no."

Gray, who grew up on a horse and cattle ranch outside the town of 25 residents, graduated with a class of just 18 from Plevna High School. He and four fellow students joined the military, and news of his death spread quickly through the 138-person town, said school secretary Lynette O'Connor.

An avid hunter and member of the school's basketball team, Gray was known to be helpful and quick with a smile.

Gray's relatives said the soldier felt so strongly about the Army that he reenlisted two or three years ago, despite the war. He loved being in uniform, they said, noting that writing the op-ed piece must have been a difficult decision.

"I thought it was pretty brave of them to do that," said Marge Griebel, who is married to Gray's grandfather. "It is good that some of us people back here can hear some of those things. They must have put a lot of thought and time into that letter before they put it out."

Griebel called Gray a hero and said the family was grief-stricken.

"It was something they knew could happen, but they just kept praying that it won't," she said.

Gray, who went by the name Tell, wrote on his MySpace page that he would like to meet past leaders, including Winston Churchill, John F. Kennedy, Abraham Lincoln and George Washington.

"I have so many questions for those leaders in our time of need," Gray wrote.

But, Gray wrote that his wife was his hero, calling her "the strongest woman I know." He also talked his infant daughter, Ava Madison Gray, and his dreams for the future: "Being a good person who others can turn too in times of need. Becoming a great father."

The U.S. command released more details on the deadly Sept. 10 accident in Baghdad that killed seven soldiers, including two sergeants who helped write a New York Times op-ed article sharply critical of the Pentagon's assessment of the Iraq war.

Sgt. Omar Mora and Sgt. Yance T. Gray were among seven NCOs who wrote the Aug. 19 piece entitled "The War As We Saw It" expressing doubts about American gains in Iraq.

Another co-author, Staff Sgt. Jeremy Murphy, was shot in the head while the article was being written. The Army Ranger and reconnaissance team leader flown to a military hospital in the United States and expected to survive.

The U.S. command said the accident occurred in the Baghdad suburb of Shula when soldiers from the 1st Infantry Division's 2nd Brigade were in an armored transport truck on their way back from a raid in which they had captured three insurgents suspected of attacks on U.S. and Iraqi soldiers.

"The unit was returning to base after the raid when their vehicle apparently lost control and fell approximately 50 feet from a highway overpass," the military said in a statement.