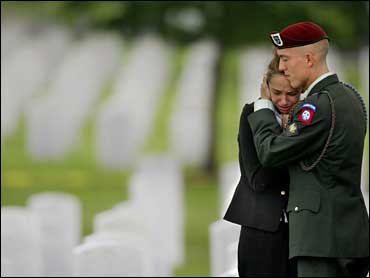 U.S. military deaths from Iraq and Afghanistan now surpass those of the most devastating terrorist attack in America's history, the trigger for what came next.

The latest milestone for a country at war came Friday without commemoration. It came without the precision of knowing who was the 2,974th to die in conflict. The terrorist attacks killed 2,973 victims in New York, Washington and Pennsylvania.

An Associated Press count of the U.S. death toll in Iraq rose to 2,696. Combined with 278 U.S. deaths in and around Afghanistan, the 9/11 toll was reached, then topped, the same day. The Pentagon reported Friday the latest death from Iraq, an as-yet unidentified soldier killed a day earlier after his vehicle was hit by a roadside bombing in eastern Baghdad.

Not for the first time, a war that was started to answer death has resulted in at least as much death for the country that was first attacked, quite apart from the higher numbers of enemy and civilians killed.

Historians note that this grim accounting is not how the success or failure of warfare is measured, and that the reasons for conflict are broader than what served as the spark.

The body count from World War II was far higher for Allied troops than for the crushed Axis. Americans lost more men in each of a succession of Pacific battles than the 2,390 people who died at Pearl Harbor in the attack that made the U.S. declare war on Japan. The U.S. lost 405,399 in the theaters of World War II.

Despite a death toll that pales next to that of the great wars, one casualty milestone after another has been observed and reflected upon this time, especially in Iraq.

There was the benchmark of seeing more U.S. troops die in the occupation than in the swift and successful invasion. And the benchmarks of 1,000 dead, 2,000, 2,500.

"There's never a good war but if the war's going well and the overall mission remains powerful, these numbers are not what people are focusing on," said Julian Zelizer, a political historian at Boston University. "If this becomes the subject, then something's gone wrong."

Beyond the tribulations of the moment and the now-rampant doubts about the justification and course of the Iraq war, Zelizer said Americans have lost firsthand knowledge of the costs of war that existed keenly up to the 1960s, when people remembered two world wars and Korea, and faced Vietnam.

"A kind of numbness comes from that," he said. "We're not that country anymore — more bothered, more nervous. This isn't a country that's used to ground wars anymore."

Almost 10 times more Americans have died in Iraq than in Afghanistan, where U.S. casualties have been remarkably light by any historical standard, although climbing in recent months in the face of a resurgent Taliban.

The Pentagon reports 56 military deaths and one civilian Defense Department death in other parts of the world from Operation Enduring Freedom, the anti-terrorism war distinct from Iraq.

The toll among Iraqi civilians hit a record high in the summer, with 6,599 violent deaths reported in July and August alone, the United Nations said this week.

Among the latest U.S. deaths identified by the armed forces:

A new study on the war dead and where they come from suggests that the notion of "rich man's war, poor man's fight" has become a little truer over time.

Among the Americans killed in the Iraq war, 34 percent have come from communities reporting the lowest levels of family income. Half come from middle income communities and only 17 percent from the highest income level.

That's a change from World War II, when all income groups were represented about equally. In Korea, Vietnam and Iraq, the poor have made up a progressively larger share of casualties, by this analysis.

Eye-for-an-eye vengeance was not the sole motivator for what happened after the 2001 attacks any more than Pearl Harbor alone was responsible for all that followed. But Pearl Harbor caught the U.S. in the middle of mobilization, debate, rising tensions with looming enemies and a European war already in progress. Historians doubt anyone paid much attention to sad milestones once America threw itself into the fight.

In contrast, the United States had no imminent war intentions against anyone on Sept. 10, 2001. One bloody day later, it did.