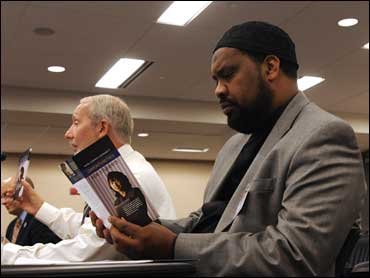 The U.S. is its own worst enemy when it comes to the desperately important task of recruiting immigrants as spies, analysts and translators in the war on terror, new Americans are telling intelligence officials. The government's policies raise suspicions and fear in the immigrants' home countries and disturb potential recruits here who might otherwise want to help.

The U.S. knows it needs the help. At the heart of a Friday summit with immigrant groups was a stark reality: The intelligence agencies lack people who can speak the languages that are needed most, such as Arabic, Farsi and Pashtu. More importantly, the agencies lack people with the cultural awareness that enables them to grasp the nuances embedded in dialect, body language and even street graffiti.

At the suburban Virginia summit, not far from the CIA and National Counterterrorism Center, officials gathered more than a dozen representatives of recent immigrant and other ethnic groups to get their recruiting assistance.

"We are going to ask you to open up your communities to us," said Ronald Sanders, an assistant national intelligence director, and the son of an Egyptian immigrant mother.

The officials got an earful in return - about immigration and hiring rules and foreign policies that make life harder in immigrants' old countries. The intelligence agencies' own practices also came under criticism: extraordinary rendition, holding prisoners at Guantanamo Bay in Cuba, harsh interrogation practices that some say amount to torture.

"Basically they've scared people," said Amina Khan, of the Association of Pakistani Professionals and an attorney formerly with the U.S. Energy Department.

Immigrants "have always seen and regarded the United States as a law-abiding country," Khan said in an interview with The Associated Press. "Now we are the only superpower in the entire world. For us, when we hear things like renditions or Guantanamo Bay, which for many is considered outside the letter of the law, there is an element of fear."

Many immigrants come to the United States already fearing the intelligence agencies of their home countries.

A man named Aung, from Myanmar, said his countrymen in the United States are spied on by Myanmar agents.

"Basically by attending this conference I myself am on the list," he said. It will complicate his visits home to see his father, he said, asking that his full name not be used.

"In our culture it is looked down on to be a ... spy," added Humira Noorestani, whose family is from Afghanistan.

Some U.S. policies after the 9/11 terrorist attacks made things worse, said Kareem Shora, of the American-Arab Anti-Discrimination Committee.

"The policy missteps and mistakes tended to alienate the very community they are now trying to approach and work with," Shora said. "The NSA wiretapping, rendition, waterboarding, linking the war in Iraq with the issue of radicalization and the terrorism threat. ... What I ask is that at some point that these conversations address these hard issues."

Even the Japanese-American experience of World War II haunts this conference. Larry Shinagawa, of the University of Maryland's Asian American studies program, said immigrant groups have reason to be suspicious of the government's sudden interest. The government admitted in 2000 after years of denials that census records were used to track down Japanese-Americans by name and address for imprisonment in internment camps during the war.

One major need now is for people who can speak the languages most needed in the anti-terror fight. The children of immigrants, even if they don't grow up speaking their parents' language, can learn it to the required level of proficiency in 16 weeks. It takes people without that cultural heritage about 63 weeks, according to Jean AbiNader, a government cultural trainer with IdeaCom. Inc.

And then there are cultural matters as well. Immigrants and their children don't need to learn these things; they can teach them.

The Department of Homeland Security and the FBI are collaborating on a summer internship program to begin to tap that expertise. Twenty college students are coming to Washington, D.C. for 10 weeks. They will get free Arabic classes in the morning at George Washington University and spend the afternoons working in the agencies' intelligence offices.

"We need these people, their expertise, their understanding of culture, of language. We don't have it today and it is a great deficiency," said Charles Allen, a long time CIA officer who is now the Homeland Security Department's intelligence chief. "This will be an enormous augmentation."

U.S. policies have until recently forbidden recruitment of first-generation Americans who have direct family ties abroad, a practice that began after World War II, despite the fact that many code breakers in that conflict were not born in America, said National Intelligence Director Michael McConnell.

New rules drop that obstacle, he said. Still, the security clearance process can take 12 to 18 months for a citizen without close ties abroad. It can go on for years for children of recent immigrants. McConnell wants to shorten that to 60 days.

The agencies will try to contain the risk of giving people with close foreign associations access to top secret information by increasing the scrutiny that all employees get once they are cleared, a practice known as life cycle monitoring.

McConnell told the meeting of immigrant community leaders that he is increasing sensitivity training for the intelligence agencies' 100,000 employees.

U.S. officials are trying to adjust how they talk about the war on terrorism so as not to alienate Muslims. That adjustment is needed, said Mohammed H. Ali, an imam with a Virginia Muslim community organization.

"I'm concerned about the language used to describe terrorism," he said.

McConnell said he is, too.

"We try not to refer to 'jihad' as something that's bad," McConnell noted, referring to a recent government communications policy.

It's a first and somewhat controversial step toward shaping the language the United States uses to compete with the international messages of al Qaeda. The terror group's messages are increasing: In 2005 it issued about 15 video or audio messages. In 2006, there were 50. In 2007 there were 97. There will probably be even more in 2008, including a fresh message from Osama bin Laden this week.

"We did a good job in the war against Communism. We have not done a halfway decent job of countering the virulence (of al Qaeda) and the message properly," Allen said.

"I never use the term 'global war on terrorism,"' Allen said. "I have never used it publicly, and I don't write it that way either."

"We have so much work to do because countering this ideology is absolutely central to everything that we do. This is our way of countering al Qaeda in the future. If we don't get it right and we don't do the outreach correctly, we will simply lose ground," Allen said.