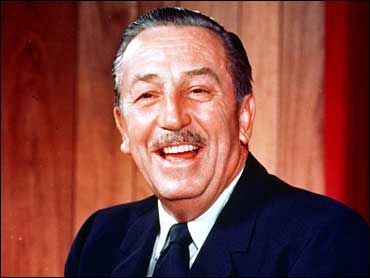 Most of us think of Walt Disney as the creator of Mickey Mouse and Disneyland. But his impact on American culture went beyond cartoons and theme parks.

Whether it was hit television programs such as "The Mickey Mouse Club" or the marketing of products, Disney changed our world.

Yet little was known about Walt Disney, the man — until now.

Neal Gabler has written what many are calling the definitive Disney biography in his new book, "Walt Disney: The Triumph of the American Imagination."

On The Early Show Wednesday, Gabler offered insights into the childhood, early career and personal life of the man who created Mickey Mouse and changed the face of animation forever.

Gabler told co-anchor Hannah Storm about Disney's very difficult childhood, and the failure of his first studio. He told viewers about Disney as a husband and family man, and as a businessman.

Gabler addressed Disney's reputation as an anti-Semite, and he discussed how Disney reinvented recreation with Disneyland, though his true dream for Epcot was never realized.

But Gabler told CBS News that Disney's "greatest legacy was his mindset that you could look at the world and impose your will on it. You could control a world that seemed so out of control. He seemed to make dreams come true. We feel the same affinity. If Walt can do it, we can do it. It's a powerful legacy."

Gabler told Storm that it took him "seven long years to write the book.

Storm noted the irony that a man known for understanding what kids love had a very difficult childhood himself.

"I think there was a cause-and-effect relationship here between what he finally produced and the childhood that he had," Gabler observed. "He grew up under very arduous circumstances. His father owned a paper route, and Walt delivered the papers and, 40 years later, he still had nightmares — he would wake up in the middle of the night having nightmares about having to trudge through snowdrifts up to his neck or having to redeliver papers that somehow had been missed or hadn't been delivered. So this was a very difficult childhood — and, to top it off, all the money he earned was kept by his father, so he earned nothing from this."

Asked if Disney chose animation as a path out of his harsh early reality, Gabler responded, "He was always interested in art. He was a very good artist when he was very young. But, again, I say, there was a cause-and-effect relationship here because the life was so difficult, the childhood was so difficult. There was no time to play. He would get up at 3:30 in the morning to collect the papers.

"So, what Walt did is, he devised, in my estimation, an alternative reality, a better reality than the one in which he lived. And, in some respects, he spent his entire life trying to perfect that reality, and animation was one of the forms of doing that. Animation is really kind of the ultimate form of control. You take inanimate objects, and you bring them to life, and there's only one other figure aside from Walt Disney who really does that, and that's God. And Walt Disney, I'm sure, saw the affinity."

Storm pointed to another irony: that a man adored by many as a benevolent, grandfatherly figure was also demonized for the type of boss he was and had a reputation as an anti-Semite.

"That's one of the questions everybody asks me," Gabler said, " 'Was he an anti-Semite?' That's out there. My answer to that is, not in the conventional sense that we think of someone as being an anti-Semite. But he got the reputation because, in the 1940s, he got himself allied with a group called The Motion Picture Alliance for the Preservation of American Ideals, which was an anti-Communist and anti-Semitic organization. And though Walt himself, in my estimation, was not anti-Semitic, nevertheless, he willingly allied himself with people who were anti-Semitic, and that reputation stuck. He was never really able to expunge it throughout his life."

As for the type of boss Disney was, Gabler said he was "Always a perfectionist. Obsessive about that. But, early on, there was a real sense of camaraderie, a sense of spirit, a sense of mission. 'We're gonna make the greatest animations ever.' That all emanated from Walt. As time went on, particularly after 1941, when the studio was struck by the Screen Cartoonists' Guild, Walt became much more tyrannical, much more difficult to work with. And Walt saw people in instrumental terms. Walt's idea was, 'Can you help me make these cartoons perfect? If you can do so, great. If you can't, you're what he called dead wood. Forget you.'"

Disney was also different on the financial front than he's envisioned today.

"You think of Walt Disney as being tremendously successful," Gabler remarked. "It was, ultimately. But "Snow White" was the only animation, of those great, golden animations, with the exception of "Dumbo," the only two that made money."

Gabler also said the Epcot of today isn't what Disney envisioned. He said Disney would be "very disappointed. Walt's final vision in his life, which was Epcot, was a fully-operational city of 100,000 people, an experimental city that had parkland, the latest in technology, the latest in communication, transportation. It became a kind of glorified world's fair. But Walt had much larger ambitions for it. He was an urban planner at the end of his life."

Go to Page 2 for many quick, interesting tidbits about Walt Disney.FAST FACTS ABOUT WALT DISNEY, provided by Knopf Books, the publisher of Gabler's book: