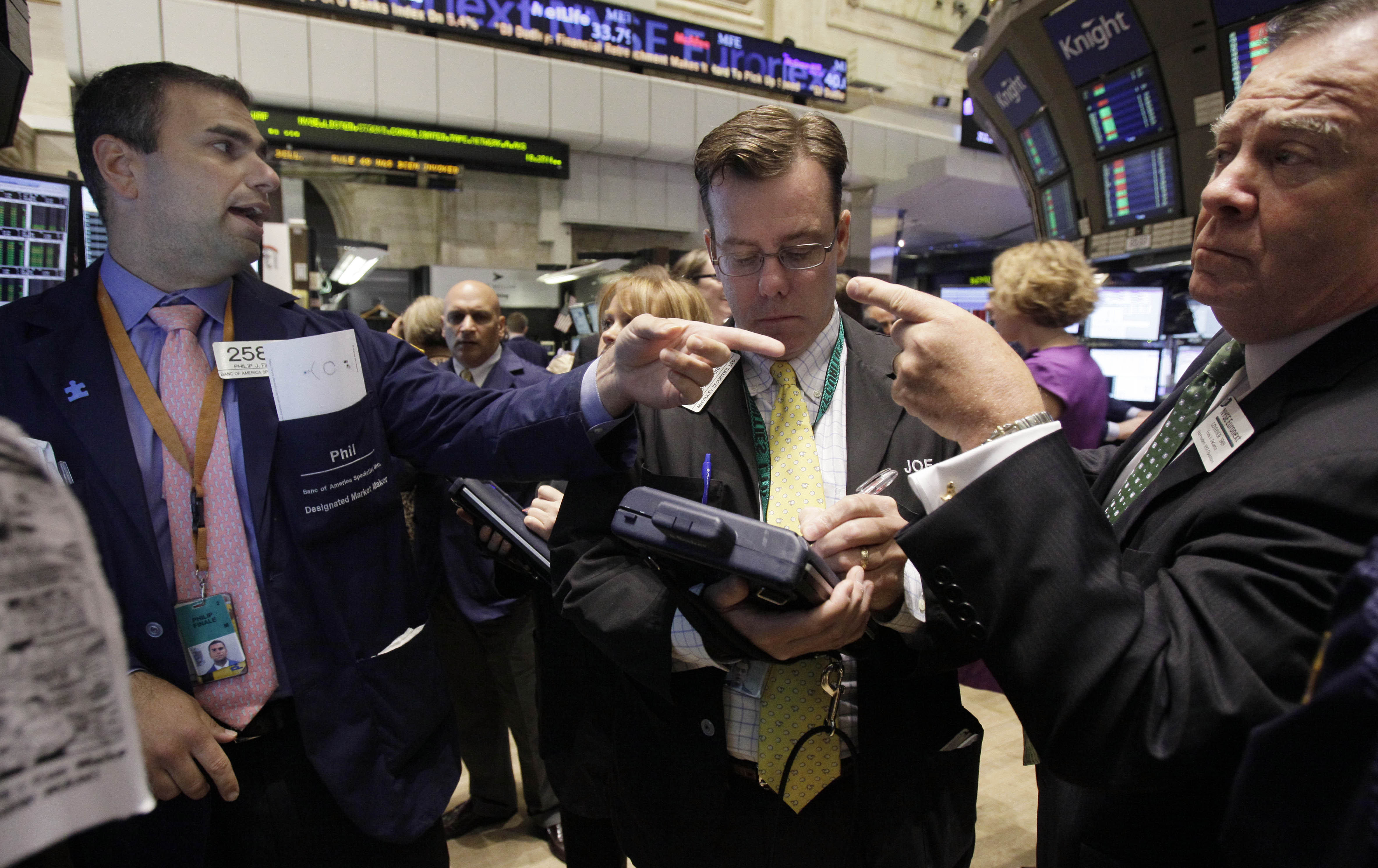 NEW YORK - The Dow Jones industrial average fell more than 400 points Thursday in a return to the wild swings in the market last week, as more signs of economic weakness revived investors' fears of another recession.

The intense selling on Thursday started as soon as trading began, and the Dow was down 528 points shortly after the opening bell. The drop ended four days of relative calm in the stock market.

Market strategists said investors were increasingly pessimistic about the economy. It wasn't just the day's economic reports — warnings like this one added to the gloom:

The U.S. and European economies are "dangerously close to recession," Morgan Stanley economists wrote in a report. "It won't take much in the form of additional shocks to tip the balance."

"This is yet another stage of panic selling," said Gene Peroni Jr., a portfolio manager with Advisors Asset Management with $7.3 billion in client assets. "Investors are reacting first and asking questions later."

In an interview with CBS News senior business correspondent Anthony Mason, President Barack Obama said he did not think the U.S. was in danger of sliding into another recession.

However, Mr. Obama added: "We are in danger of not having a recovery that's fast enough to deal with what is a genuine unemployment crisis for a whole lot of folks out there and that's why we need to be doing more."

Obama: U.S. not in danger of second recession

Last week was one of the wildest in Wall Street history. The Dow moved more than 400 points on four straight days for the first time.

Stocks had been relatively stable this week because investors were calmed by strong earnings reports and a flurry of corporate acquisition deals. The Dow had fallen 76 points Tuesday and risen four points Wednesday — the first time that the average rose or fell by less than 100 points on two straight days in nearly three weeks.

That ended Thursday. And with stocks down big, money flooded into U.S. Treasurys and gold, both considered safer investments.

CBS MoneyWatch's Jill Schlesinger notes that because investors are pouring money into the treasury market and driving down yields to historic lows, that means mortgage rates are sinking.

The yield on the 10-year Treasury note briefly fell below 2 percent for the first time, before recovering to 2.07 percent. Low yields show that investors are willing to accept a lower return on their money in exchange for safety. Demand for government debt has stayed high, and yields low, even after Standard & Poor's stripped the United States of its top credit rating.

Gold rose to a record of $1,829.70 per ounce before falling back to $1,829. That's up from $1,400 at the start of the year and more than double the price several years ago. The price of gold has set one record after another, with some investors looking for stability and others simply looking to cash in.

The Morgan Stanley economists cut their forecast for growth in developed economies this year to 1.5 percent from 1.9 percent. Over the past 20 years, growth for developed economies has been closer to 2.3 percent. The economists cited policy errors among other factors, including Europe's slow response to its debt problems and the partisan debate in Washington around the U.S. debt level.

Concerns about Europe are hanging over U.S. markets. A default by any country would hurt the European banks that hold European government bonds, plus American banks that have loans to their European counterparts.

"Europe is the big question in the market, and nobody really knows what happens from here," said Scott Brown, chief economist at Raymond James.

Investors were also worried by a report from The Wall Street Journal that U.S. regulators are scrutinizing the U.S. arms of European banks to see if they have reliable access to funds.

The European Central Bank also said Thursday that one unidentified bank had borrowed $500 million a day earlier for seven days through its dollar lending program at 1.1 percent. A request for dollars from the ECB suggests that at least one big bank is having trouble obtaining funds. Analysts said fears about one bank's troubles are enough to spark concerns about the entire industry because traders are already worried about banks' sovereign debt holdings.

— Inflation at the consumer level rose 0.5 percent in July, the highest since March.

— Manufacturing has sharply weakened in the Philadelphia region, according to a report from the Federal Reserve. Manufacturing had been one of the economy's strongest industries since the recession ended in 2009, but its growth has slowed this year.

— The National Association of Realtors said the number of people who bought previously occupied homes dropped in July for the third time in four months.

The fresh signs of economic weakness underscore the challenge for the Federal Reserve as it tries to help the economy with prices rising and the job market weak, said Jack Ablin, chief investment officer at Harris Private Bank.

"Every time the economy got the sniffles, we had the Federal Reserve standing by with tissues," Ablin said. "This time around, I think the box is empty, and we're going to have to go through this alone. I think we can do it. It's just not something we're accustomed to."

The Fed has already said it will keep short-term interest rates super-low into 2013. But the risk of further stoking inflation may keep it from taking additional steps, such as an additional round of massive bond-buying.

U.S. companies are in better financial shape than they were heading into the 2008 financial crisis, but investors may be losing faith that governments can help improve the economy, said Ann Miletti, a portfolio manager with Wells Capital Management who manages about $4 billion.

"The market may be recognizing that the quick fixes may not have worked very well," she said. "They didn't create any opportunities for employment growth. They didn't do anything for housing. They didn't do anything for the real problems, and they've been costly. If there is a double-dip recession, and there is going to be a quick fix, will that be good enough? Or do we even want that, because it hasn't done anything?"

On Thursday, U.S. stocks in industries that depend on a growing economy fell the most. Stocks of raw materials producers in the S&P 500 fell 6.2 percent, as did energy stocks. Industrials fell 6.1 percent.

NetApp Inc. fell 15.6 percent, the most among stocks in the S&P 500. The maker of computer data storage products reported revenue for last quarter that fell short of analysts' expectations.

JDS Uniphase Corp., a maker of communications equipment, fell 13 percent after it gave a profit forecast for this quarter that was below analysts' expectations.

The smallest losses came from industries whose profits are less dependent on the economy. Utility stocks in the S&P 500 fell just 2 percent because customers still turn on the lights during a recession.

The VIX index, a measure of investor fear, rose 30 percent to 41. But it is still below where it was early last week, when it was at 48.

Crude oil fell $4.11 per barrel to $83.47 on worries that a weaker global economy will mean less demand. Falling prices for crude oil should work their way to the gas pump, though, and bring household budgets at least some relief.