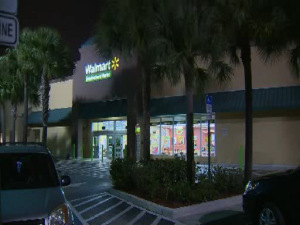 DEERFIELD, Fla. – Apparently not everyone is a fan of Wal-Mart’s employee of the month in Deerfield Beach, Fla.

According to CBS Miami, investigators believe another Wal-Mart worker angry with the recent choice of honoree fired a gunshot into the winner’s car, resulting in criminal charges.

The station says a Broward Sheriff’s Office arrest report claimed that surveillance video showed Willie Mitchell parking next to a co-worker’s vehicle in early December – and that a few minutes later, Mitchell rolled down a back window, fired a shot into his co-worker’s car, and drove off.

The “employee of the month” was not in her vehicle at the time.

A Broward sheriff’s spokesperson  said the shooting stemmed from some bad feelings after the alleged victim won the Wal-Mart award.

“She was announced as the employee of the month which you would think that would be something good, people would be happy for her,” said Veda Coleman-Wright. “But there was one employee who wasn’t happy.”

Investigators say after the award was announced Mitchell started arguing with the victim about their workload. The victim told detectives that “during the argument Mitchell told her repeatedly, ‘I’m gonna show you.’”

Investigators said they’re still stumped about the exact motive for the shooting.

A Wal-Mart representative told CBS Miami that Willie Mitchell no longer works for the company.