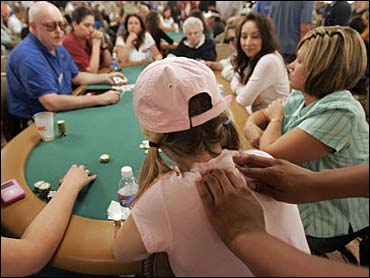 The last report I sent you was late Thursday night. Let me catch you up on what has transpired since then.

I did not do particularly well in the $2,500 No Limit Hold'Em tournament on Friday. I picked up very few playable hands during the first hour, and had to throw them away when they did not connect at all with the flop.

When I was dealt the jack-ten of clubs in late position I raised, hoping to pick up the antes (called the blinds, as you will recall). A very aggressive player in the small blind raised me. I thought a bit, and came to the conclusion he was trying to push me off my hand. I had a pretty conservative image at the table, and he undoubtedly thought he could push me around. Well I decided to show him a thing or two about whom he was messing with. I re-raised all in! He called with a smile and turned over a pair of aces. So much for my ability to "read" my opponents.

But wait. After getting my pocket aces cracked repeatedly for three days by lesser starting hands, it was finally my turn to inflict a "bad beat." The flop came ten-four-two with two clubs! I had 14 ways to win – any jack, ten or club would do it.

It was eerily reminiscent of the hand in which my friend Russell Rosenblum was eliminated at the final table of he $10,000 championship event in 2002. He moved all in with the jack-six of diamonds in hopes of stealing the antes. The player in the big blind called with ace-ace. The flop came with a jack and two diamonds and Russell had 14 "outs." Unfortunately none of them came, and he was eliminated.

Well I don't profess to have Russell's talent, but on this particular hand I had more luck. A ten on the river doubled me up.

It felt like the travails of the first 48 hours had finally ended, and I would now get my share of good luck. Actually, all I was hoping for was to avoid getting unlucky. I don't look to put bad beats on other players; I just want to avoid getting outdrawn when I am the favorite.

Poker players are always whining about the bad beats they take. I try not to do that. One of the top poker tournament money winners of all time put it in the best perspective when he claimed that no one suffered more bad beats than him. He said that he never puts his chips in the pot when he is not a favorite. The only time he loses a pot is when someone puts a bad beat on him. So for two days I tried to think like TJ Cloutier, and keep telling myself that if they keep calling me when they have the worst hand, eventually I am going to do great.

After a few hours of uneventful play following my lucky catch against the pocket aces, I picked up ace-queen in late position. A dangerous hand, known as "walking back to Houston" among the old timers, as it is the hand with which no limit hold'em players most frequently are knocked out of tournaments.

I raised and got called by an older woman who had been playing very conservatively. The flop came queen-six-four, an excellent flop for my hand. I made a pot sized bet and was surprised when she called. The turn card was the 10 of spades, which looked pretty safe. Because there were now two spades on the board, as well as a straight draw, I wanted to bet enough that she could not justify calling if she had a spade draw or straight draw. So I bet a lot.

She moved all in for what she had left, which was not a lot. The pot was too big for me to take the chance that she was raising with a lesser hand than mine, so I called and she showed me a pair of sixes for a winning hand of three sixes.

About 40 minutes later almost the identical hand arose. I had ace-queen, she had two sevens, I flopped a queen and moved all in, she called with three seven's.

But it felt like a much more normal session at the tables, where I had my share of good and bad hands, good and bad luck (she was a slight favorite before the flop in both of those hands.)

After taking a break, I jumped into a single table satellite in hopes of winning back the $2,500 I had spent on the tournament. I played well, got my share of cards, did not get unlucky, and ended up splitting the $5,120 when we got down to two players. (That is the usual practice.) My first win in three days!

I have now played in 21 satellites at a cost of $6,740 in entries, and have won only $1,720 in two of them. Historically, I have cashed in one of four. In an effort to figure out whether I need to adjust my playing style, I have spent the day today in my hotel room analyzing my notes of every hand I have played in every satellite. (Some players can remember all the hands they play. I can't, so I keep a notebook at the table and jot down all the key hands I play.) Here is what my analysis shows.

In each of those ten situations, had I won that critical hand I would have finished in the money. Seems like there is some curse associated with queens that I cannot overcome. Most of my bad beats in critical pots have come at the hands of a queen.

Sorry I don't have a more positive report for you, but I remain confident that if I play my best the cards will eventually even out. Maybe all my good fortune is being saved up for tomorrow's event. It would be the thrill of a lifetime to make it to the final table of a WSOP event. If I do, you will be the first to hear (after my wife and daughters).

A few amusing notes from the last few days. There was a Ladies Only event yesterday. I tried to register. They wouldn't let me. I complained that if there was a men's only event the EEOC would sue them. They weren't impressed with my argument. Apparently last year a couple guys dressed up in drag and tried to play, but their plot was uncovered and foiled.

It is common for players to put something on top of their hole cards, to protect them against being fouled by another player discarding his or her cards on top of them. Most of us have lucky charms we use as card protectors. I have been using my Tibetan coin, as you know, but have been alternating that with several others I carry (so far to no avail).

Yesterday, I saw a huge shark's tooth on someone's cards. Glass and silver figures are routine (teddy bears, dragons, turtles, lions, Buddhas, just about anything you can think of). But yesterday topped them all. A guy had a petrie dish on his cards. He refused to tell us what was growing inside, but it was clearly organic. Much ribald speculation followed.

So much for tales of the felt. Time to go win.