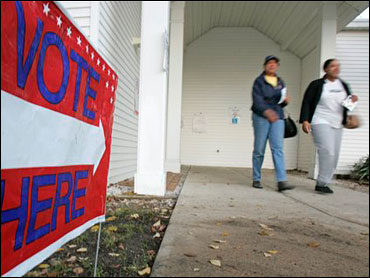 A six-and-a-half hour long wait in Missouri. A four-hour wait in Manhattan. A "mess" in Virginia.

The biggest trouble, however, was big crowds. Many folks seemed to take it in stride.

"People are happy and smiling," Sen. Benjamin Cardin said as he voted at a Maryland school. "People are very anxious to be voting. They really think they are part of history, and they are."

Reports are coming in from election protection groups suggesting that Virginia, a key battleground state, is having the most issues, with 20-plus cities and counties having serious problems: machines breaking down, substituted paper ballots being stuffed into suitcases, boxes and duffle bags (with poll officials telling voters they will be counted later), unbearably long lines, frustrated voters walking away. The situation has some voters worrying that their votes won't be counted, reports the CBS News Investigative Unit.

In the West, Californians also faced long lines, but voting went smoothly. In Orange County, south of Los Angeles, about 400 people were on hand to treat problems with the county's all-electronic voting system, said Brett Rowley of the registrar's office.

"We've got paper ballots as a backup," he said.

Heavy rain plunged a handful of Los Angeles polling places into the dark, forcing some to move voting booths outside until electricity was restored. Voting didn't stop.

Click here for a roundup of voting problems reported across the country.

Election officials predicted turnout rates as high as 80 percent in California, the country's most populous state and the highest holder of electoral votes. In Virginia, State Board of Elections executive secretary Nancy Rodrigues said she expected 75 percent of the state's registered voters to cast ballots by Tuesday night.

Pennsylvania Gov. Ed Rendell urged voters to "hang in there" as state and country officials braced for a huge turnout in that hotly contested state. More than 160 people were lined up when the polls opened at First Presbyterian Church in Allentown. "I could stay an hour and a half at the front end or three hours at the back end," joked Ronald Marshall, a black Democrat.

Hundreds converged on polling precincts in Missouri, another crucial battleground state. Norma Storms, a 78-year-old resident of Raytown, said her driveway was filled with cars left by voters who couldn't get into nearby parking lots.

"I have never seen anything like this in all my born days," she said. "I am just astounded."

In some places the wait was longer than two hours.

"Well, I think I feel somehow strong and energized to stand here even without food and water," said Alexandria, Va., resident Ahmed Bowling, facing a very long line. "What matters is to cast my vote."

Some voting advocates worried that - tolerant voters or no - the nation's myriad election systems could stagger later in the day, when people getting off work hit the polls.

"We have a system that wasn't ready for huge turnout," said Tova Wang of government watchdog group Common Cause. "People have to wait for hours. Some people can do that. Some people can't. This is not the way to run a democracy."

Ohio, which experienced extreme voting delays in the last hours of the 2004 election, had some jammed paper problems in Franklin County. "We're taking care of things like that," said elections spokesman Ben Piscitelli. "But there's nothing major or systemic."

Perhaps the most bizarre barrier to voting was a truck that hit a utility pole in St. Paul, Minn.'s Merriam Park neighborhood. The accident knocked power out for about 90 minutes to two polling locations. Joe Mansky, Ramsey County's elections manager, said voting continued at those sites.

Election judges said the ballots were kept secure at one of the locations until the power was restored and the ballots could be run through an electronic machine, while a backup generator kicked in at the other site.

Late Monday, McCain's campaign sued the Virginia electoral board, trying to force the state to count late-arriving military ballots from overseas. No hearing has been set.

McCain, the Republican candidate and a POW during the Vietnam War, asked a federal judge to order state election officials to count absentee ballots mailed from abroad that arrive as late as Nov. 14.

Tuesday, the judge ruled he will hear the lawsuit on Nov. 10. He ordered election officials to keep late-arriving ballots until then.

Lawsuits have become common fodder in election battles. The 2000 recount meltdown in Florida was ultimately decided by the Supreme Court.

What is uncommon about Tuesday's contest is the sheer number of voters expected to descend on more than 7,000 election jurisdictions across the country. Voter registration numbers are up 7.3 percent from the last presidential election.