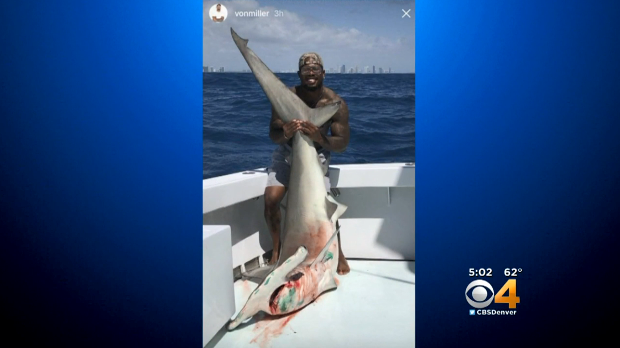 MIAMI -- A Denver Broncos player is under investigation for reeling in a hammerhead shark while fishing off the coast of South Florida, CBS Miami reports. Von Miller posted a video of his catch on Instagram, which was later deleted.

Miller also posed for a photo next to the shark -- which was more than 9 feet long -- before releasing it back into the ocean. The photo was shared on Twitter.

According to CBS Sports, killing the shark would have been a wildlife violation. But Miller, who was on a guided fishing tour with his friend, threw the shark back into the water, which isn't punishable in Florida.

CBS Denver reports it's unclear from the video whether the shark was alive or dead. It floats away on its side before disappearing under the water.

The Florida Fish and Wildlife Conservation Commission (FWC) is looking into whether a violation occurred.

"The FWC has received the images and video and is looking into whether or not a violation occurred in this incident," Carol Lyn Parrish, the commission's public information coordinator, said in an email to CBS Denver.

Miller could be facing a second-degree misdemeanor, which is punishable by a fine of up to $500 and 60 days in jail, the FWC confirmed.

CBS News has reached out to Miller's agent, Joby Branion, for comment and did not immediately get a response.

PETA is working with officials to get to the bottom of the matter, Newsweek reported.