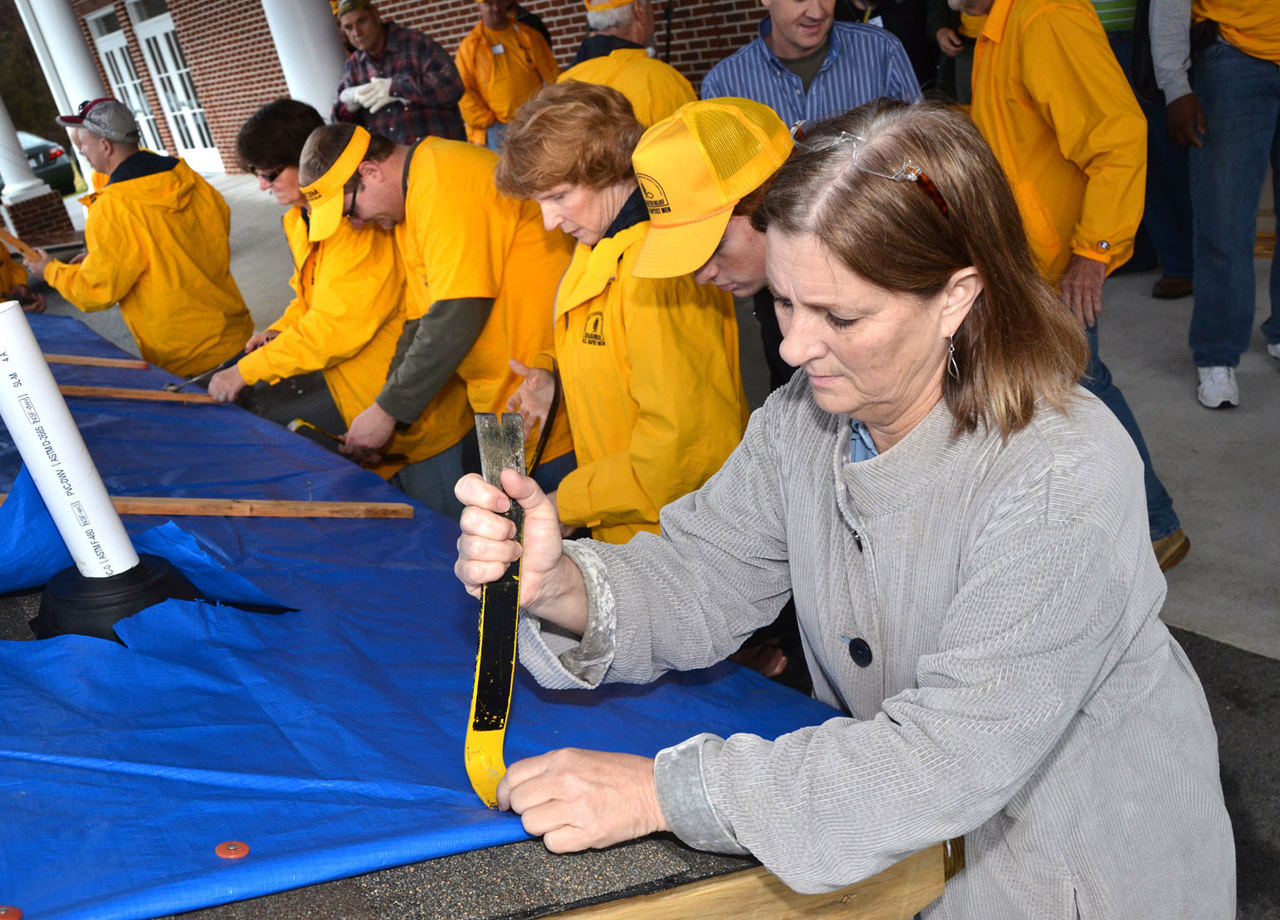 (AP) TUSCALOOSA, Ala. - Taking a break from laying sod in a tornado-torn neighborhood, volunteer David Elliott cocked his head to the left. He was trying to remember all the trips he's made to help rebuild after disasters.

Elliott went to New Orleans seven times after Hurricane Katrina swamped the city in 2005, or was it eight? He was in Nashville, Tenn., after floodwaters inundated the city in 2010. He's been to Alabama three times since tornadoes killed about 250 people statewide in April. Wait: that was just last year?

Rebuilding after storms is becoming a growth industry as the United States is slammed by more natural disasters, and leaders of the response efforts say the nation's recovery network functions as well as it does because of a backbone of volunteers nicknamed "disaster junkies." The small group of people like Elliott travel from tragedy to tragedy shoveling mud out of flooded houses and rebuilding neighborhoods laid waste by busted levees, tornadoes and wildfires. Often, they bring more helpers with them.

No one knows exactly how many disaster junkies are active in the United States, but the National Voluntary Organizations Active in Disaster says a core group of around 300 people travel the country at least six months out of each year performing such work. Based in Arlington, Va., the nonprofit group estimates several thousand more people are like Elliott and make several trips each year helping out after disasters.

Often associated with churches or other religious groups and traveling at their own expense, these volunteers sleep in churches or mobile homes and frequently eat food provided by other volunteers.

While volunteers and others provided labor worth some $147 million and donated another $200 million toward relief aid in 2008, the last year for which figures are available, some recovery projects still can't get off the ground because of the sheer number of disasters that struck the country in recent months, said James McGowan, associate executive director with National Voluntary Organizations Active in Disaster.

"After all these disasters across the country our resources have really been stretched," said McGowan, whose organization includes 51 nonprofits. "We've been struggling with it."

Thousands of people volunteer regularly without approaching "junkie" status. The American Red Cross, which is part of McGowan's organization, said 24,236 of its volunteers helped out after 137 disasters in 46 states last year, but most went to only one or two sites.

Dan Burton, a Samaritan's Purse project manager who has worked on disaster recoveries from Atlanta to Alaska, said the "junkies" provide a knowledge base and experience level that many less-experienced volunteers lack. Major disaster assistance work would be much more difficult without them, he said.

"There's an array of jobs to do, and they're just willing to do whatever it is that we have to do," said Burton, overseeing the rebuilding of a home that was destroyed by a tornado in Alabama last year.

With the spring severe weather season drawing near -- and as deadly severe storms have already roughed up the country this week -- volunteers are still cleaning up and rebuilding from 2011, when the United States had a record 12 weather disasters that caused at least $1 billion in damage. That's more major disasters than occurred all through the 1980s, according to the National Oceanic and Atmospheric Administration.

Aside from the dozens of tornadoes that damaged or destroyed about 24,000 homes in Alabama on April 27, there was the mega-twister that pummeled Joplin, Mo.; flooding in the Northeast from Hurricane Irene in August; wildfires in Texas and other parts of the Southwest; and flooding along the Mississippi River. And recovery work continues along the Gulf Coast from Katrina, the disaster that many people say spurred them to service in the first place.

The devastation of Katrina compelled Julie Davis to help more than six years ago, and she and her husband Ken have been repeat volunteers ever since. They once were "snowbirds," or retirees who visited the South in search of warm weather each year, but now they spend weeks at a time each winter performing volunteer work in disaster-torn areas like Tuscaloosa, Ala.

Chatting with displaced homeowner Deloris Mack as her husband worked on the woman's rebuilt house, Davis said volunteering is addictive.

"We are definitely junkies because you get it in your blood and just can't quit," said Davis, of Girard, Penn. "(It's) just the satisfaction of knowing that you are helping someone, that they aren't expecting anything and you just come up."

Mack said such volunteers aren't just random people who help out -- she believes they are sent by God.

"To me they're angels. Only a God-sent person would come out and build a home for free," Mack said. "So many homes were destroyed. People were lost and didn't know where to go and, like me, don't have the money and the resources to do anything."

An estimated 44 percent of Americans claim to perform volunteer work. A study published by the Society for the Psychological Study of Social Issues in 2004 said volunteering typically is a "long-term behavior" that people repeat over an extended period once they've tried it the first time. The study said the "vast majority" of volunteers get involved through service or religious organizations, with the latter being the most common.

That's what happened to Elliott, who takes vacation time off work in California to volunteer for Samaritan's Purse, a Christian organization based in Boone, N.C. His first volunteer experience was after Katrina, and he's been on at least 10 more trips since then.

Experiencing the aftermath of a disaster was intriguing and adventurous, he said, but the work mainly gave him a way to live out his Christian faith with others. At times, Elliott said, volunteering is a stunning experience, such as when he first arrived in Tuscaloosa last year to begin helping with the cleanup.

"I was floored. You can see disaster on television ... but unless you're actually walking in it, it really doesn't hit home," said Elliott. "The experience of being here and seeing the devastation was just .... I was awestruck at the amount of sheer power that caused the devastation here."

Burton, who supervised a tornado rebuilding project where Elliott helped, said the repeat volunteers break down into different categories.

"We do the disaster relief operations, which is the initial people that come in. There's a group that just does that. That's what they love, cleaning up or mucking out after floods. Then there's another group that loves to do the rebuild process. They're kind of the rebuild junkies. They just keep coming wherever we are in the United States," he said.