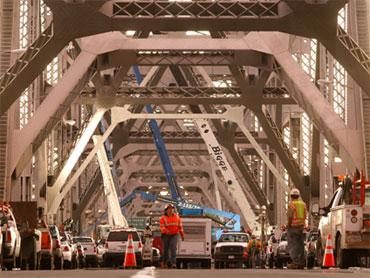 Secretary of State Colin Powell proposed on Friday that an interim administration be set up quickly in Iraq with exiled Iraqis playing a prominent role but also including "those inside" who opposed Saddam Hussein.

"We are anxious to move quickly," Powell said after a meeting at the White House with President Bush, Secretary of Defense Donald H. Rumsfeld and Condoleezza Rice, the president's national security assistant.

"The day of liberation is growing near," Powell said at a news conference at the State Department. "We are almost in control of their country, and we'll be in complete control soon."

Whether Saddam is alive or not "is not going to affect our efforts," Powell said about new speculation that the Iraqi president probably was still alive and trying to rally resistance to the deadly coalition onslaught.

The structuring of the interim authority is a subject of debate within the administration and between the United States and European nations.

According to U.S. News & World Report, Rumsfeld sent two memos to Bush suggesting that Iraqi and Kurdish expatriates, with some experience with democracy, were better equipped to take over the country than Iraqis living under Saddam.

But White House aides, confirming that account on Friday, said Bush had rejected Rumsfeld's suggestion. In a nod to Rumsfeld, the president left open the possibility of setting up the interim authority in parts of Iraq while coalition forces pressed for control of the whole country.

Asked what sort of mix he thought should be in the interim authority, Powell said, "We want to include those who were in the external opposition who have worked so long and so hard and with such determination for the liberation of Iraq, but also individuals inside."

"We are now putting together plans to structure that approach and in due course we will make it known to everyone," Powell said. "We want an interim authority that is representative of all the groups who are interested in the future of Iraq."

At the White House, Rice said Bush wants exiles and Iraqis currently living in the country to be in the interim authority.

"We will help Iraqis build an Iraq that is whole, free and at peace with itself and its neighbors," she said.

On Thursday, in Brussels, Belgium, Powell met with foreign ministers of NATO and the European Union and reaffirmed the administration's view that "the coalition has to play the leading role" in the interim between Saddam's regime and a new Iraqi government.

"But that does not mean we have to shut others out. There will definitely be a United Nations role, but what the exact nature of that role will be remains to be seen," he said.

Powell continued those discussions Friday at the State Department with Javier Solana, the senior diplomat of the European Union, and he talked by telephone to Kofi Annan, the U.N. secretary-general.

"We are at the beginning of a process of dialogue, pragmatic dialogue, to determine what the appropriate role of the U.N. should be," Powell said.

"The U.N. will be a partner in all of this. Everybody understands that. There's no disagreement about that."

At the joint news conference, Solana said, "We have to continue talking, discussing the subject." But, he said, "the U.N. will have, as the secretary has said, a major role to play."

France and Russia, which opposed the war in the first place and wanted to extend U.N. searches for weapons of mass destruction in Iraq, insist that reconstruction should be guided by the United Nations, not the United States or Britain.

"We must stabilize Iraq and the region," French Foreign Minister Dominique de Villepin said Thursday in Brussels. "The United Nations is the only international organization that can give legitimacy to this."

But Rice, like Powell, said Friday, "The coalition naturally will have the leading role for a period of time to ensure the provision of essential services to the Iraqi people."

And Sen. John Warner, R-Va., the chairman of the Senate Armed Services Committee, said the United Nations should not be "the managing partner."

"That role remains for the United States for a period of time," he said.