(CBS/AP)
WASHINGTON (CBS/AP) It probably seemed like a good idea at the time: a few diamond crusted necklaces for the wife, a few lap dances for himself. Surely that's worth a couple of visas for foreign workers hoping to come to America.

Turns out a federal judge thought otherwise. Last week, U.S. District Judge Paul L. Friedman slammed Mike O'Keefe with a one year sentence after the former offical at the U.S. consulate in Toronto admitted to expediting visas in return for booty and bling.

"For some reason I really love Las Vegas," O'Keefe wrote in an email to Indian jewelry entrepreneur Sunil Agrawal. "I guess it is because it is a place where I can lose my stiff diplomatic persona and just act like everyone else. Let me know if we can work anything out."

And work it out they did.

O'Keefe admitted he expedited 21 visas for employees of STS Jewels between 2004-2006 and in return got the presents from Agrawal, who ran the company. The pair, who still call each other friends, were sentenced together in Washington.

Agrawal, a 50-year-old native of India who lives in New York City, got probation and a $100,000 fine, which prosecutors said was one of the largest ever imposed by the Washington court for the misdemeanour charge of illegal supplementation of salary. Agrawal told the judge he wasn't aware that giving the gifts to O'Keefe created a conflict of interest.

O'Keefe, a 62-year-old who now lives in Portsmouth, New Hampshire, was sentenced to the felony charge of accepting an illegal gratuity. He must return four rings and a necklace made of gold, rubies, diamonds and tanzanite he received for himself and his wife. He also must pay $5,000 to compensate for trips to New York with two exotic dancers and Las Vegas with three strippers from Toronto's Brass Rail Tavern, where he was a regular customer.

"I took gifts of jewelry and essentially cashed in my career," O'Keefe told the judge, explaining he was unhappy at work and being treated for depression at the time of the crime. "I knew these were inappropriate gifts and I never should have accepted them. To this day, I don't know why."

O'Keefe did not mention his relationship with the dancers. But O'Keefe's attorney, Bernard Grimm, said his client is medically unable to have sex.

O'Keefe's wife Ann tearfully asked the judge to be lenient on her husband, saying he's a good man and the crime was small compared to his 40 years of public service. Besides more than 20 years as foreign service officer, he served in the U.S. Air Force, six years as a Democratic member of the New Hampshire State House in the 1970s and most recently as a professor at Southern New Hampshire University. Grimm said O'Keefe was fired by the school the day he pleaded guilty in the case in February. 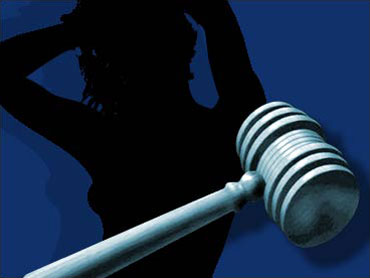 (CBS/AP)
Friedman told O'Keefe he recognized his public service and did not think he would commit another crime. But the judge said he was sentencing him to prison to send a message that bribery will not be tolerated among government workers.

At the time of the crime, O'Keefe was deputy non-immigrant visa chief at the U.S. consulate in Toronto, the last stop in a long State Department career that took him to posts across Latin America and Africa.

He met Agrawal in 2002 when he went to a gem fair in Tuscon, Ariz., and delivered speech about a government investigation that found tanzanite, a gem mined in Tanzania that represented a large part of STS Jewels' business, was not being sold to finance terrorist operations.

The next year O'Keefe was posted in Toronto and began to personally handle STS's application for Indian national employees to enter the United States on a fast track. Since the terror attacks of 2001, the United States has tightened controls over non-immigrant visas like those granted to students, tourists and workers.

According to email cited in court documents, O'Keefe wrote to Agrawal that he was growing tired of the visa arguments and frustrated with younger subordinates who were "determined to find problems" and reject STS applications. He overturned their rejections, even when a subordinate noted that terrorists use jewelry to raise money.

He also hinted about gifts he would like to receive, asking whether Agrawal could help him find a necklace to give his wife for Christmas in one email and in another recalling a conversation they had about making a trip to Las Vegas.

But this time what happened in Vegas didn't stay there.