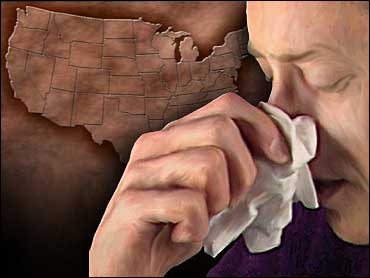 Scientists have discovered a new cause for the common cold -- a previously unknown virus that turns out to be a very common and repeated cause of many respiratory infections.

The Early Show Medical Correspondent Dr. Emily Senay says your next cold could be the result of on of many cold-causing rhinoviruses, a respiratory syncytial virus (RSV), or even the flu.

But, she says, now there's another likely culprit: a metapneumovirus (MPV). It was discovered just two years ago by researchers in the Netherlands, and has probably been around causing colds for a long time.

Like other seasonal respiratory infections, the virus causes common colds in grown-ups and severe coughing, wheezing and congestion in children.

Researchers observed data from 2,000 children after they were treated for lower respiratory infections, according to a report in the New England Journal of Medicine. MPV caused about 15 percent of common colds in children, and 12 percent of the most severe cases.

The researchers concluded that thousands of hospitalizations of infants due to this virus occur every year. They say MPV is second only to RSV as a cause of severe lower respiratory infections in the young. It could be one of the most common causes of overall illness in infants. Other studies report the incidence is high in children all over the world.

The virus appears to afflict just about everybody. Senay says MPV can cause serious illness in young children or adults who are older or immune compromised, though it doesn't seem to happen very often. Millions of children get metapneumoviruses every year; a much smaller number have serious problems.

Senay says the virus was hard to find because it does not grow well in cell cultures used to study the tiny organisms. Researchers are now able to see it using its genetic information.

Now that researchers can see it, Senay says they can start studying how it spreads, how it relates to more serious complications such as pneumonia and bronchitis and whether a vaccine might be developed someday.

There is no cure for MPV, so, like colds, people will have to let it run its course. If an easier diagnostic test can be developed, doctors could identify it so they don't give unnecessary treatments such as antibiotics. Senay says since there's no treatment for it, there's not a lot people can do once they identify it other than treat the symptoms.