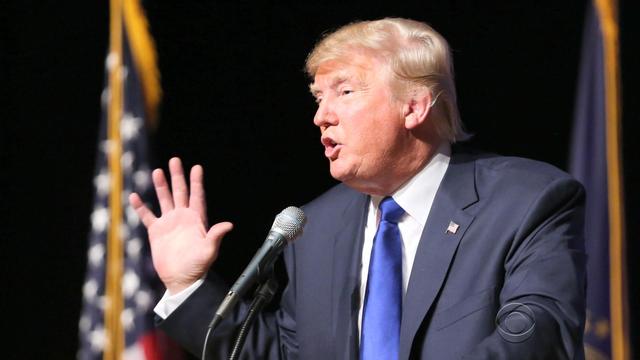 The Virginia Republican party said that all of the major presidential campaigns, including Donald Trump's, were informed about a "statement of affiliation" on the state's GOP primary ballot when it was adopted in September, and no one raised an objection.

But Trump began a Twitter war Sunday with the Virginia GOP, accusing it of "working hard to disallow independent, unaffiliated and new voters. BAD!"

Voters in Virginia's Republican primary will be required to sign their names to a nine-word statement that reads: "My signature below indicates that I am a Republican."

The Virginia GOP accused the media of misconstruing its intent by calling the signature requirement an "oath" or "pledge." On its website, the party argues that it "is not an 'oath' or 'pledge' in any way" and says it "is not targeting any candidate, group of voters or an unreasonable barrier to voting."

It also has no lasting legal impact, since Virginia still doesn't recognize party registration. A voter who signs the statement won't be known in law as a member of any party, but the record will note that he cast a ballot in the 2016 GOP primary and signed a piece of paper that says he is "a Republican."

Under the assumption that there will be greater turnout this cycle, the state GOP appears to have been aiming to use the affiliation statement as a means of gathering more contact information on voters, especially their email addresses and phone numbers. But only the name and signature will be required on the ballot.

The 2000 GOP Virginia primary required Republican voters to pledge not to vote in another party's primary, and the state party points out that "That Republican primary still holds the record for highest participation in a Republican process at over 660,000 voters, with a turnout of over 17 percent."

Whether those nine words constitute an oath or a pledge or a statement of affiliation, it's probably rankling Trump because he performs especially well among voters who have not declared a party affiliation. Though not much polling has been done in Virginia, polls in New Hampshire show he's popular with independents. In a recent survey by American Research Group, for example, Trump won the support of 15 percent of registered Republicans in New Hampshire, but nearly twice as many -- 29 percent -- of those who were not registered with either political party.

Trump has flirted with the idea of mounting a third-party bid if he feels the Republican Party is treating him unfairly. At the last GOP debate earlier this month, however, he said he "really" is ready to commit to not running as an independent.