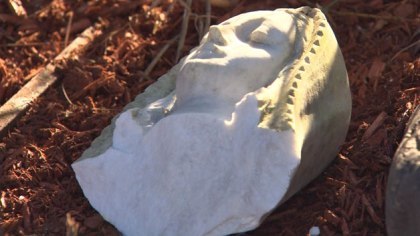 The Rev. Frank Silva at Saint Margaret's Church in Burlington saw the destruction right away.

"I immediately noticed the head had been chopped off and as I got closer the hands had been broken off," Silva said.

The statue of the blessed mother was desecrated, with her head knocked right off. But that's not all, just up the hill, two more statues were vandalized as well.

"The initial feeling was things have been violated in many ways, certainly from a religious and spiritual perspective," Silva said.

Parishioners can't believe what they are seeing.

"It's sad, disgraceful, disrespectful people who have no faith or no morals to do something like that," Rick Abreu said.

"It's really sad that someone destroyed something that belongs to the church," Paula Burke said.

Nine-year-old Olivia Abreu was upset when she heard and had to see it for herself.

A disturbing crime, with few clues, that for Rev. Silva couldn't have come at a worse time.

"We are on a high this Easter season," Silva said. "To have something like this happen hits you right in the gut."

Police said they don't think this is connected to recent vandalism at a church in Norwood.

They are hoping the public can help.

The church said they will fix the damage and they will forgive the person responsible, but they don't condone the behavior.